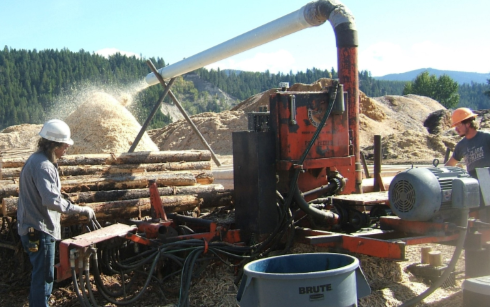 River Country Wood Products manager, Angie Postlethwaite sits in her small office out in the wide open Kootenai Business Park, while all around her, seven or eight guys are stripping, loading, cutting, and peeling  under a bright blue, early October sky. About 80 yards to her left, Philip Erquiaga and David Tinnell are operating a bark peeler. Carefully feeding the raw lodgepole pine, already cut to length, Erquiaga watches carefully while Tinnell grabs the stripped post and stacks it, according to diameter in one of several piles of finished product.

About 100 yards south, Yard Boss, Doug Marshall, and his crew are doing much the same thing in a much bigger covered facility operating a Morbark PS8 peeler. About an eighth of a mile, to Angie’s right, down the service road, other guys are cutting and filling 4 ft. x 4 ft. square white plastic bags with precut firewood, cut from the logs and posts that did not pass muster, which they will load right into your vehicle for $50.

All this started back in 2005, when, according to Postlewaite, Steve Garayalde opened Luck-E-G Post & Rail. The operation changed hands in 2014 , when Lon Jasper bought the business and changed the name to River Country Wood Products.

They are busy shipping out more than 150 units of 70 posts each week to suppliers and stores coast to coast, grossing about $3 million per year. “We sell nationally mostly to big stores like Tractor Supply, and locally to Homesteaders. Most of our supply comes from the US Forest Service and private landowners,” Postlethwaite told The Montanian. “Everything we don’t use becomes firewood.”

All that shaving and peeling creates a lot of sawdust, and River Country sells that too. “We sell it to sawmills for hog fuel,” she explained, “they use it to steam-dry their lumber. We also sell it to folks who paint it green and put it on the ground to look like fake grass,” she added with a laugh.

Marshall’s job is to keep the guys moving and motivated, and he likes his job. “It’s outside, with plenty of exercise, they basically pay you to work out,” Marshall said.

One of the most visible and active of the business tenants out at the Kootenai Business Park, River Country Wood Products, employs 12 people at its Libby location and another four up in Eureka. They literally have tons of firewood for sale, with bundles for $45, precut and loaded bags for $50, and “load it yourself” truckloads for only $25.

This article is the first in a series planned to profile business operating in Libby’s the Kootenai Business Park.