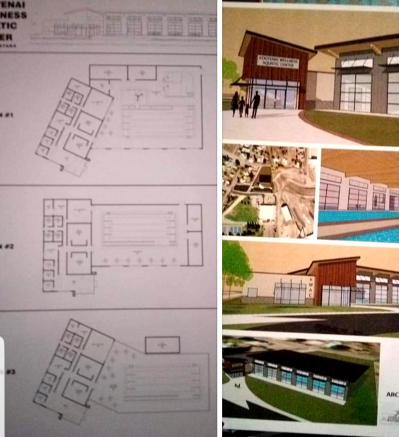 About 50 community members had the opportunity to watch a program presented by Miklos Valdez representing the consulting firm, Counselman-Hunsaker, Aquatics for Life. Afterwards, attendees were able to ask more in-depth questions of local planning committee members at three different stations set up around the room.

The local committee started after a 2018 survey in which 96% of respondents reported being  in favor of a pool for Libby, Valdez explained. Now, after the public’s affirmation through that survey and many committee meetings, the project has entered its second phase, to decide which option to pursue.

The group  commissioned an architectural firm to create schematic drawings of three options for an aquatic center. That  phase was funded by contributions from the Libby Park District.

Option one, which is projected to cost approx. $9.8 million, would include a main indoor pool with four lanes and two access assist lifts, a graduated wading pool, and a separate, multi-depth therapy pool with lift that would be heated to 90 degrees. It would also include a lobby, locker rooms and a multi-use community room.

Option  two, coming in at approximately $7.7 million, is essentially the same as option one except there are no therapy or wading pools.

Option three would cost and estimated $5.2 million and is equivalent to option two, but the main pool would be outdoors so the facility would only be open seasonally.

For all options, the main pool would be 3.6 feet at the shallow end and seven feet at the deep end. There would be starting blocks to accommodate competition, and as Valdez explained, they are looking at four main categories of use; recreation, competition, instruction, and wellness.

According to  research done by Counselman-Hunsaker, about 75% of facility use would be recreational, which could include children, teens and family swim times and, lap swimming in warm water. The pool could also be used for competition, in slightly cooler water, by future school teams. There would undoubtably be youth and adult  swimming lessons, senior movement classes, and if the community supports option one, a wellness, therapy pool as well.

The facility, would initially require two full time employees, one for mechanical maintenance, and one for customer service.

The facility is slated to be built on land just north of City Hall that is currently occupied by some recycling bins and is owned by the Lincoln County Port Authority.

The Kootenai Wellness Aquatic Canter planning committee (KWAC) is confident that the initial construction costs will be covered by a group of benefactors, and they are  now actively looking for grant programs which will ensure continued operation of the center for years to come.

“In Libby, we’ve been pool poor for so long, we tend to forget how many ways this community can use a pool,” said committee member, Tony Petrusha. “Last time we tried to float a bond for construction and a mill levy for maintenance both failed. After the community chooses the design, we will formalize a business plan, and get some hard numbers. Then we will throw that specific amount back to the voters to approve. Then, we would begin construction, and create a 501c(3) non-profit organization and actively pursue ongoing donations.”

Petrusha also said that the average annual property tax bill increase for a home valued at $100,000 only be about $35 per year.

One interested local, Levi Harmon, age eight, told The Montanian, “I would use the pool to hang out with my friends and some old people need it to rest. My dad would do back flips off the diving board, and if I was his age, I would too.”

Unfortunately for Levi, there is no diving board planned or the facility.

KWAC will conduct an  online survey until Nov. 20 and take all input received into consideration. The survey may be emailed to you, and it has also been shared on The Montanian’s Facebook page.

Residents are encouraged to contact kwaclibby@gmail.com for more information or to submit feedback.