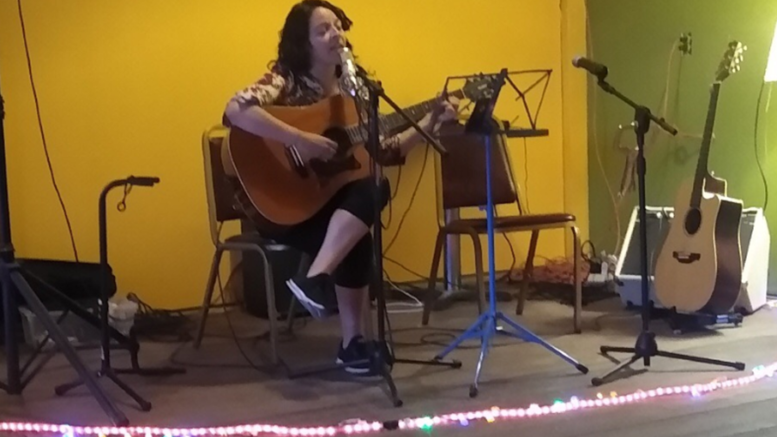 When Paula Tesoriero came to Libby recently to visit her friends Laurie and Brian Walsh, she never imagined how the town would embrace her.

An accomplished singer-songwriter, Tesoriero
brought her guitar with her on this trip. Then, while on a walk with the local ladies of the “Sloth Hiking Team,” it was suggested that Paula might want to play at the Libby Farmers market.

The ladies jumped at a chance to help out and make that happen. After some checking, however, it was decided that Paula’s style was not compatible with a busy, noisy market, but that she was welcomed to play at an Open Mic Night in downtown Libby.

Regularly held every Tuesday evening from 8 to 10 p.m. at the Old Libby Mercantile building, Paula we
welcomed to come down and play at an impromptu Thursday evening gathering on June 17.

Local Musician Drew B., who can be heard playing solo guitar often at Cabinet Mountain Brewery in downtown Libby, had opened the doors to welcome Paula and was acting as MC/manager for the open mic that night.

It is fair to say he was favorably impressed. And
because Tesoriero was leaving in just three days, Drew pulled together some other local musicians— Joan Christianson and Mike Laffoon, known as the Cosmic Stringers— set up some mics, speakers and guitar stands, and hosted a special music night where Paula was also featured.

The musicians were gathered in a recently redone storefront space in the old Mercantile building, a space that is rumored to become an Italian restaurant with
mustard and avocado walls and a mural of Tuscan
countryside.

Paula sang songs of “breakup and redemption” in a style reminiscent of Nora Jones. She did covers of John Prine, Blaze Foley, and Roger Miller.

Drew B. played a couple of sets, as did the Cosmic Stringers. It was one of those magical, spontaneous nights which happen in this wonderful town we call home.

Tesoriero was classically trained on the piano, starting at age 6. She later wrote songs for a piano based band called the Paper Hats, but really found her groove when she picked up the guitar four years ago. “What I Like about the guitar is that I don’t know anything about it, so I can create freely,” said Tesoriero.

At 27, Paula and her band – Paula T and Company –
are now busy recording their first record of all original songs.  Tesoriero says she will be back with her guitar
and possibly a brand new cd for sale. In the meantime, we wish her well.

15-minute slots for each performance.

you name it! The stage is yours.

All talent welcome –  Free to the public