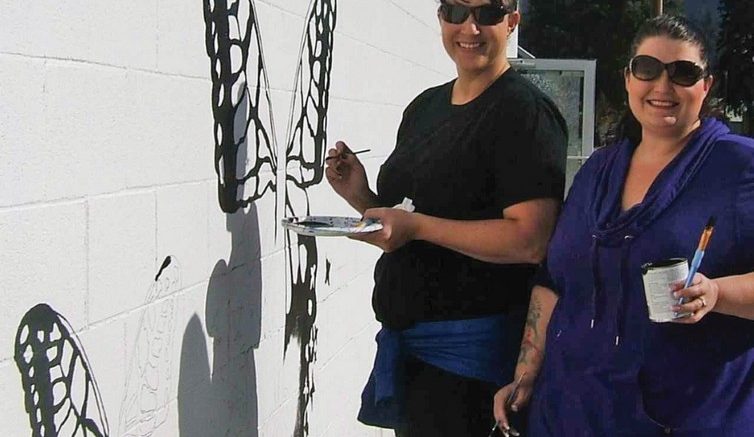 According to Todd Berget, the wings that have been painted on walls throughout Libby are not his idea, Yvonne Moe Resch thought of it, he said, “I’ve just done so many projects with art and kids that it was easy for me to run with it.”

Berget isn’t kidding. He also played a big role in the sasquatches that are all over town, he’s helped with many of the murals, he worked on the fish on the school fence project, and he makes the iconic metal eagles.

Berget says that this and other projects are not about him, or even about art. They are about pride in our community and creating interest to promote tourism.

Berget taught for many years and would involve students in community art projects so they would feel ownership and develop civic pride. “Kids always want to get out of this town,” he said, “I’d bet them a dollar that they’d be back in a year, and I was usually right.”

It’s always a good thing for people to have pride in their community, so Berget focuses on improving the community and developing that civic pride.

The artists painting the newest addition to the wings on walls project, Kristen Moniz-Martens and Nicolle Young-Couvillion are also focusing on positive community outcomes.

They are painting two sets of Monarch butterfly wings on the wall outside of the Spirited Art Classes Studio on 6th Street.

Moniz-Martens told The Montanian that she likes this project because, “It involves a lot of our community’s artists, and I like to see them out doing things. It will also help get people out and about exploring our community,” she said.

Moniz-Martens would like to see another community project come out of this. It could be sort of like a scavenger hunt, and it would encourage people to explore our community she said. “It would be nice if the businesses or chamber could do some kind of promotion for people who find all of the wings.”

“Even something as simple as an I love Libby keychain would work,” said Young-Couvillion.

The wings on walls project is planning on including 12 artists and wings murals, but not all 12 artists haven’t signed on yet, Berget said. “I challenge our local artists to step up and so something. Don’t be afraid to get involved. The worst case scenario is just painting over them.”

Left to right: Nicolle Young-Couvillion and Kristen Moniz-Martens paint Monarch butterfly wings on the wall outside of the Spirited Art Classes studio, on 6th Street across from the Libby Police Station. This is the first set of adult and child wings that have been completed. Photo by Moira Blazi, The Montanian.