Charged with all other offenses.

Marquis, Jeb E.
Charged with felony all other offenses. LCJC.

with intent to sell.

Weber, Tylin J.
Charged with felony theft, all others.

At this time, the military is not identifying this Soldier by name.

“We are extremely proud of this Soldier’s achievement and recognize that this is a milestone for not only Montana, but the entire National Guard and Army,” said Maj. Gen. J. Peter Hronek, the Adjutant General for Montana. “This Soldier had to volunteer several times to reach this goal, which is a demonstration of her dedication and commitment to service.”

The Soldier enlisted in to the Montana Army National Guard in Dec. 2020. She was then sent to Fort Benning to complete Infantry One Station Unit Training (OSUT), a 22 week course that combines Army basic training with advanced individual training in infantry skills.

While attending OSUT, she was recommended by her training staff and chain of command for the opportunity to attend the Sniper Course due to her superior performance, which included qualifying as an expert shooter.

“We’re all incredibly proud of her,” said Capt. Joshua O’Neill, OSUT Company Commander. “She epitomizes what it means to be an infantry Soldier and there wasn’t a doubt in our minds that she would succeed in the U.S. Army Sniper Course.”

With the completion of training, the Soldier will join her unit.

Volunteers of America Northern Rockies (VOA) operates Veterans Services programs across Wyoming, Montana, and Western South Dakota. Last year, these programs served 2,708 Veterans in our region. Our Supportive Services for Veteran Families program, operated in partnership with the VA, helps Veterans and Veteran families facing homelessness in every county of MT and WY.

When Stacey got in touch with Volunteers of America, he was living at the VA Domiciliary and had a month to find a home. His past struggles with addiction and homelessness had left him with minimal support and a poor credit score, which made finding a place to live a challenge.

With the help of his case manager, Stacey was finally able to find an apartment that would work for him.  Stacey is now living happily in his new home and is looking forward to what life has in store for him. 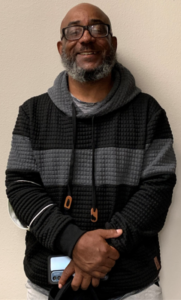 Stacey poses for a photo, courtesy of VOA.