This list does not reflect those who may have been arrested and/or released over the past nine days. 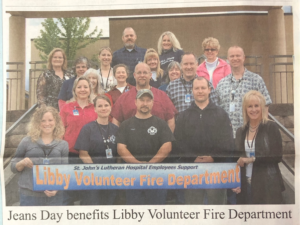 Here are some of them:

– An anonymous male called 911 to report that a small white car drove by and threw a beer into his neighbor’s yard.

– A Libby woman complained that she was woke up by loud music coming from Helen’s. She said they lived a block away from the bar.

7:22 a.m.
– A resident at 1560 Parmenter Creek Road reported the theft of three sets of antlers from her garage.

– A Libby man came into LCSO to report that while he was standing at the intersection of Mineral Avenue and 5th, a guy – 5’7”, black hair, mustache, medium build, checkered shirt and blue jeans, came up and said, “I got news
for you. If you don’t leave the Accords alone, I am going to kill you.” So the complainant started to cuss him and started
towards him and the
suspect fled on foot.

Sanders County Sheriff, Bill Alexander, of Thompson Falls sported a black eye after an off-duty tussle outside a bar in Plains with his opponent in last fall’s general election. Billy Hill of Trout Creek, who ran against Alexander last November, said he delivered the punch after Alexander took a swing at him outside The Mint Tavern about 1 a.m. Saturday. The Plains Police Chief says he intends to issue a citation to Alexander for disorderly conduct.