All charges are misdemeanors unless specifically listed as a felony. Dollar figures shown (if any) are bail/bond amounts.

Transferred prisoners are listed as released because they were released by Lincoln County. 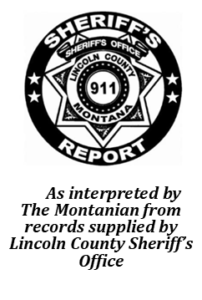 As winter winds howled through Lincoln County this past week, dispatchers logged over 70 reports to the 911 call center on January 13.

Hats off and much gratitude to all LC first responders who serve on
these and all days.

On January 14, 2021 at approximately 8:30am, deputies and detectives from Lincoln County Sheriff’s Office responded to a domestic disturbance with multiple weapons involved. While on scene the male allegedly involved in the disturbance was shot by law enforcement. The male was transported by Libby Volunteer Ambulance to Cabinet Peaks Medical Center and then was transported by Alert Helicopter to Kalispell Regional Medical Center.

The deputy involved has been placed on paid administrative leave until the investigation is completed.

With these investigations ongoing, no other details are available at this time.