detained on the date listed above and does not reflect those who have since been arrested or released.

destruction of a communication device. LCDC.

Charged with three counts felony assault
with a weapon. LCJC.

Charged with felony
possession with intent
to sell. LCJC.

The Montana Highway Patrol commissioned 12 new troopers at a graduation ceremony held at the Civic Center in Helena on Thursday.  Attorney General Austin Knudsen and MHP Colonel Steve Lavin addressed the graduates at the event before their badges were pinned and they were sworn in to their new positions as Highway Patrol Troopers.

“You will be responsible for whether the people you encounter can enjoy their freedoms in this special place we call home,” Attorney General Knudsen said. “Unfortunately, crime knows no boundaries, and criminals are growing bolder every day. You will be on the front lines protecting Montanans from dangerous criminals and keeping our communities safe.”

The new troopers went through a rigorous training schedule over the past 23 weeks. Five of the 12 troopers are from Montana and the other six came from out of state.

“It’s a privilege to welcome these new troopers to our ranks. They were chosen from hundreds of applicants for their upstanding character, professionalism, and sense of duty. I look forward to the good works they will do for Montana,” Colonel Lavin said.

The Montana Highway Patrol continued to recruit for trooper positions through Oct. 1.  For more information on the recruitment process contact Kristi Skaalure at (406)444-3259. 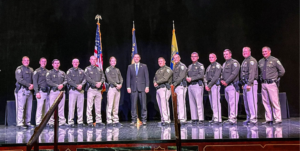