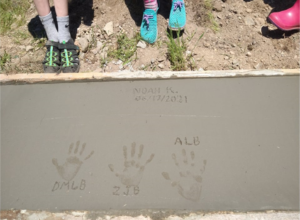 Noah Kehoe spent several years as a student at Yaak’s only schoolhouse.  Starting in 2nd grade and studying thru 7th, Noah and four other siblings were taught by so many familiar teachers, Mr. Moe, Ms. Rose, and Ms. White just to name a couple.

After high school and going into service for the Army, Noah came back to The Yaak in the fall of 2018. While passing the school sign on a regular basis again, Noah got in touch with Sabre’ Burson-Alderete, head teacher of the Yaak Elementary School K-8 and asked if he could give the school sign some needed maintenance and a bit of an update in a special way.

Back at the school, a cement slab was poured and steel post brackets were embedded to support the tapered log posts.  While this cured, Noah had been toting the posts and the arch piece in and out of his yard every day to naturally kiln the wood -a process of letting it air dry in the sun. He would rush out to cover it when the rain came through, and then move it back under a shed each night to be sure it would stay dry from dew
or a nightly shower.

Each day he continued to sow  love and care into the project which most might not have thought would go in to a simple sign.  Noah’s attention to detail and dedication proved that of a young leader and made many in the Yaak proud.

When given the chance to drive by, you will
notice the beautiful “Cat’s Eye” in the wood about 2 feet from the ground in a piece specifically found for the new sign.

Through it all, this 3-month project was done strictly by hand, other than where tools were  needed for a specific type of drilling. The sign itself was sanded, resealed, and stained.  Time to hand chisel a bit deeper into the sign before painting was spent, as well.  The paint an amber gold on bobcat’s coat to mix in for what had been the black paw.

With so many of our kids moving out of The Yaak for work, it is nice to see one not only return home, but return home and take the lead in our community while still at a young(er) age.  When you drive past
the school, I hope you will think of today’s students and give hope to them also staying here in The Yaak one day.

BOZEMAN — A team of scientists from Montana State
University’s Department of Microbiology and Cell Biology published
research earlier this month evaluating the effectiveness of COVID-19
vaccines and seeking to learn more about how long the resulting antibody protection may last.

The study, “Titers, Prevalence and Duration of SARS-CoV-2 Antibodies in a Local COVID-19 Outbreak and Following Vaccination” published in
the journal Vaccines, was conducted using volunteer subjects and data collected in Gallatin County beginning in March 2020, shortly after the first COVID-19 cases were reported in Montana. Around 170 volunteers had their blood drawn — many on a monthly basis — to assess whether there were antibodies present and, if so, how the titer, or concentration of
antibodies in the blood, changed over time.

For associate research professor Jodi Hedges, the study provided an opportunity to conduct real-time research on a public health issue in her community. As more Montanans and Americans receive vaccines, she said the study was a way to engage the public in critical science.

“I loved the fact that the volunteers were up for coming back to give samples every month for a year,” she said. “The enthusiasm for the project and encouragement of the participants was great. It was fun to be able to tell them their antibody status in a time of such uncertainty. This whole project was really gratifying.”

Antibodies are an immune response triggered by exposure to
something foreign, like a virus, said Hedges, who led the study. Humans produce antibodies both in response to natural infection and after
vaccination. The higher the concentration of antibodies, the more an
individual is protected from future infection. But a major question was whether a symptom-less case of COVID-19 triggered a measurable
antibody response.

“We wanted to measure the extent of asymptomatic infection by measuring antibodies in people,” Hedges said. “What if a bunch of us already had antibodies?”

As it turned out, asymptomatic infection in the community was less prevalent than initially thought, especially when a person hadn’t been in close contact with someone diagnosed with COVID-19. But Hedges and her team found that asymptomatic infection still led to an antibody response, so they sought to learn more about those antibodies.

“We were interested from a diagnostic standpoint, to see how long after infection we could see if someone had had it, as well as to see how long that protection lasted,” said Hedges.

For most study participants, antibody levels began to wane after five or six months, the team found. For those with the highest starting levels of antibodies, the time before antibody levels dropped could be as long as a year.

Hedges noted that the human antibody response triggered by a vaccine is much stronger. For maximum protection, she said, even those who have already had and recovered from the virus should be vaccinated.

“It’s an important takeaway from this that there’s a lot of variability. Just because you had it, it doesn’t mean you have a strong antibody
response,” she said.

Part of the reason that immunity lasts longer after vaccination is
because of memory B cells, said Hedges. A type of blood cell, memory B cells retain a genetic blueprint for the antibodies they create, meaning they can continue to create those same antibodies in the future. Memory B cells can be maintained in the body for decades, well after antibody levels have waned.

Hedges explained that these cells are why many modern vaccines
administered to young children can provide protection for their entire lifetime. Memory B cells are created after natural infection, but in a lower concentration than is triggered by a vaccine, meaning the immune
response is stronger after vaccination.