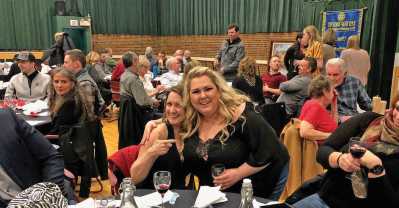 The Rotary Club of Kootenai Valley held their annual fundraising event on Friday, March 8 at the Memorial Center. The annual wine tasting was transitioned to a beer and wine tasting event this year which was well received based on the sold out crowd. The event included beer and wine tastings, dinner, a silent and live auction, raffles, and door prizes. The two big winners of the evening were Shannon Evridge (left) and Dustina Deans (right). Evridge won the Mossberg 7mm rifle, and Deans won the wine wheelbarrow. Photo by Tracy McNew, The Montanian.