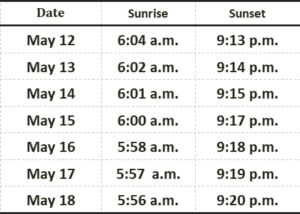 Mostly sunny in the morning then partly cloudy in the afternoon with a slight chance of showers. Highs in the lower 60s to lower 70s with upper 40s around 5000 feet. Light winds becoming west to southwest up to 10 mph in the afternoon.

Partly cloudy with a slight chance of showers and thunderstorms, highest chances along the Canadian border and eastern mountains. Lows in the mid 30s to mid 40s with near 40 around 5000 feet. Highs in the 70s to near 80 with mid 50s around 5000 feet. 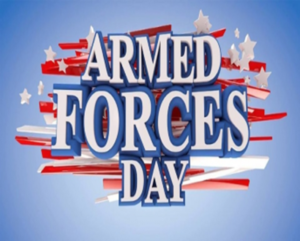 July 26, 1947 – President Harry S. Truman signs the National Security Act into law (*Statute Compilation, codified in Title 50 of the U.S. Code: War and National Defense). This Act unified the four branches of the military under a single executive authority,
the Secretary of Defense. This decision leads to the creation of the National Military Establishment.

August 31, 1949 – Secretary of Defense Louis Johnson announces Armed Forces Day as a unification of the separate Army, Navy, Marine Corps, and Air Force celebrations, a reflection of the unification of the forces under the National Security Act. Armed Forces Day was intended to replace the separate days of celebration, but some branches maintain their own celebration in addition to the joint observance. (Source: Defense.gov ) Read remarks from Senator Lodge on Secretary Johnson’s announcement as printed in the Congressional Record on April 7, 1949.

February 27, 1950 – The first Armed Forces day was proclaimed by Presidential Proclamation 2873, but not observed until May that year. President Truman declares, “Armed Forces Day, Saturday, May 20, 1950, marks the first combined demonstration by America’s defense team of its progress, under the National Security Act, towards the goal of readiness for any eventuality. It is the first formal procession of preparedness by the unified forces of our lan1.d, sea, and air
defense.”

May is National Military Appreciation Month

Declared by Congress in 1999, May was selected as a month-long observance honoring the sacrifices of the United States Armed Forces.

There are more military related observances during the month of May than any other month,

so it is an appropriate time to celebrate the

men and women in uniform.

During May, we recognize Loyalty Day,

It is a month to honor those who are serving and those who have served.

A lack of affordable housing is keeping working Montanans out of homes and forcing families to pay up 50% or more of their monthly incomes in rent. Lumber prices and labor shortages make it even tougher for developers to offer affordable homes to working families.

HB 397 bill will provide a state-based funding resource to help private developers make homes affordable and economical. Both chambers of the 67th Montana Legislature passed House Bill 397, and it is now on the Governor’s desk. The only thing standing between more affordable homes and working families is Governor Gianforte’s
signature on HB 397.

It provides nonrefundable federal housing tax credits to developers via a competitive bidding
process designed and administered by the
Montana Board of Housing. Developers get the tax credits, sell them to investors, and use the cash
for construction. This enables developers to
eliminate or significantly reduce their debt service. Properties then have affordable rents for working families and remain affordable for up to 46 years.

Since 2016, the Montana Board of Housing has denied over $310 million in federal housing tax credit requests due to lack of funding, half of which were from Montana’s small towns.

Montana missed the opportunity to build
2,000 new affordable apartments and create
4,000 construction jobs with over $186 million
in wages.

HB 397, a state tax credit, would allow more of these projects – or 30 to 60 more apartments – to be planned this year alone. If signed into law, the state tax credit will double the number of apartments with construction starting in 2022.

HB 397 could mobilize enough private capital to produce 18,000 homes and apartments and generate over $828 million in economic activity over ten years.

Montana’s continued economic recovery relies on a strong workforce. A strong workforce relies on homes that workers can afford to rent. HB 397 is based on a very successful federal program with a decades-long proven track record.

The Montana Housing Coalition, Montana Chamber of Commerce, Montana Building Industry Association, Montana Association of Realtors, and Montana League of Cities and Towns all recognized the importance and merit of this legislation and supported HB 397 through the legislature. Please contact Governor Gianforte and urge him to sign HB 397 so Montana has homes our workforce can afford.