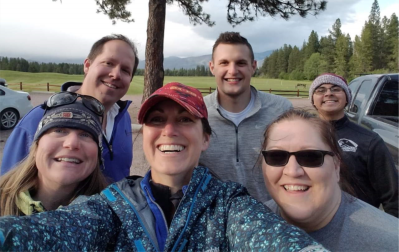 Photo taken this past June with other band directors around the state of Montana. Photo courtesy of Mrs. Hand 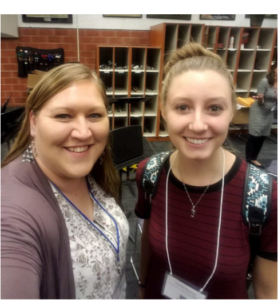 Sheri Hand and one of her  “precious students” who went on to become music education majors at University of Montana. Photo courtesy of Mrs. Hnad.

Sheri Hand has been bringing music to life in Troy’s Public Schools for seven years. Originally from Curtiss, in the upper peninsula of Michigan, she attended Northern Michigan University and upon graduating put in over 150 music teaching job applications. With jobs from Maryland to Alaska, she found the perfect fit for her right here in Troy, Montana. A beautiful, small, and family-orientated community.

Even though it was her first teaching job, Hand brought much to Troy Schools with her love of music and her volunteer service to the communities of Troy and Libby. She volunteered for Missoula Children’s Theatre, sat on the Kootenai Heritage Council’s board of directors, and participated in local musical performances and groups sharing music everyone interested.

“I feel like I was very successful after rebuilding the program,” she told The Montanian. “In the first year there were about 50 students from fifth to twelfth grade, and last year, there were almost 100 students taking part in the Troy music program.”

Hand’s love for music came at a very early age. She took piano lessons at the age of six and began participating in band when she was in sixth grade. After seven years in Troy, Mrs. Hand decided it was time for a change of scenery and was offered a job in the Drummond school district, a class B school 45 miles east of Missoula, Mont.

“My husband and I decided to move to Missoula, and we are in the process of buying a house,” she said. “Drummond school district wanted help to restart the music program.” After rebuilding Troy’s program, Hand felt that she was up for the challenge even though the school district has not had a music program for eight years.

Hand’s new position will be rebuilding a music program for students from kindergarten through twelfth grade. She already has 24 students signed up for her classes. “It will take a lot of work,” said Hand. Most of her new students will be beginners who have never had a music program in their school. Students interested in music in the Drummond district had to take private lessons previously, Hand told The Montanian. Most of her classes will be beginning band, she said.

Hand will remember her time in Troy fondly and recounted a statement made by Ed Hansen, one of her student’s grandparents. He said, “Not only did you teach the kids music you taught them a love for music.”

Troy Public Schools has filled Hand’s previous position so that the music in Troy can play on, but she will be missed. In parting, she said, “I am really grateful for the students and parents in Troy for welcoming me as a part of the community.”