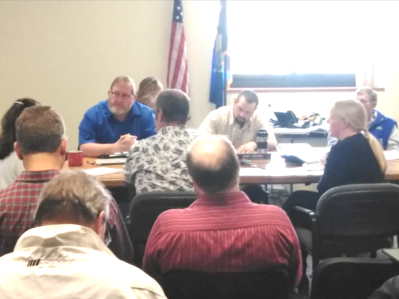 The Lincoln County Board of Commissioners met for a regular session on April 24. The meeting was opened with the Pledge of Allegiance.

At 10 a.m., the Best Beginnings Budget Resolution/ Public Hearing was scheduled. Jennifer McCully presented Resolution 2019-07 to allow a budget authority increase of $60,000 for the Early Childhood Best Beginnings Grant. The motion by Commissioner Bennett to approve the budget modification carried.

At 10:15, Fire Service Area (FSA) board appointments were made. Clerk and Recorder, Robin Benson stated District Board Vacancies were advertised in The Western News twice, The Tobacco Valley News twice, on the County website, on courthouse public bulletin boards, and on the North Annex public bulletin board. Letters were also mailed to each board to confirm vacancies of record prior to advertisement.

April 17 Commissioner meeting minutes were approved next, then Commissioner Letcher submitted two lease agreements for county-owned properties in Eureka that were also approved. There were no public comments and no agenda items for planning.

At 2 p.m., an EPA update was presented. Mike Cirian, EPA’s Remedial Project Manager for the Libby Asbestos Superfund Site talked about the four pots of money available for long-term funding which include federal funding, MTDEQ funding, leftover W.R. Grace funds, and funds generated from House Bill 30. At this time each pot of money has different regulations that apply and DEQ along with the Libby Asbestos Superfund Oversight Committee will manage the money; they continue to work through details.

Regarding future cleanup costs, Cirian said  the Record of Decision (ROD) states that homeowners are responsible for home maintenance, but not for vermiculite left behind. He also said that EPA is committed to working with the County Asbestos Resource Program (ARP) and Commissioners, and he reminded everyone that vermiculite removal is part of institutional controls which are being developed.

Regarding recent concerns about the Operational and Functional (O&F) timeline, Cirian said EPA could have done better with recent communications and is committed to responding to Commissioner concerns.

Lisa Dewitt, from Montana DEQ said that the partial deletion of OU2 (the former screening plant) is completed. Dania Zinner of EPA said she is hopeful that many operable units will follow. Currently, they are working with the City of Libby on the Environmental Covenant for Riverfront Park (OU1) and the Port Authority (OU5).

Zinner told the Commissioners about the public meeting for OU3, the former W.R. Grace Mine Site, to be held later in the day. EPA is currently working on feasibility studies for phase 1 (forested areas) and phase 2 (mine and waterways).  Dam safety construction work is being conducted and a new spillway designed. Excavations and preparations at the site are scheduled to start this summer, the project will take approximately four years to complete. As of the Commissioner meeting last Wednesday, Commissioner Peck said there had been no public comment to the Commissioners about the dam and the county has not taken an official stand on the topic.

The meeting was adjourned at 3 p.m.