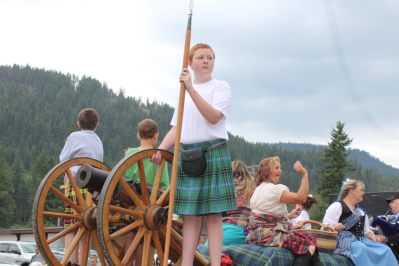 The Kootenai Highlanders’ float at this year’s 4th of July Parade in Troy. Photo by Mckenzie Williams, The Montanian.

Weapons of that era used in battles and sieges included the mace, which consisted of a strong wood or metal shaft with a head of stone, copper, or bronze with spikes. The mace and chain is a weapon with one or more spiked weights attached with a chain. The throwing axe, or battle ax, had an arch-shaped head. The top of the head is either S-shaped or convex with the lower portion curving inward. Both edges were capable of penetrating chain mail armor. The Halberd was a weapon that was held with two hands, consisting of an ax blade on top of a spike mounted on a long shaft. It always had a hook on the back side of the ax blade for grappling a mounted combatant. A spear is a pole weapon with a wood shaft and a sharpened head of metal shaped like a triangle or leaf. The javelin is a light spear designed primarily for casting as a ranged weapon. The javelin is almost always thrown by hand. A lance is a thrusting weapon with a long wooden shaft and sharp metal head usually used by charging horsemen. The longbows, were made of various wood species including yew wood, and could launch arrows up to incredible distances.

Primitive games at the event will include the ax throw, spear toss, bow and arrow, stone throw, and Haggus hurl. There will also be a tug-o-war competition, Haggis Hop obstacle races, and the always fun sexy legs, hairy legs, and chicken legs competitions. Games are sanctioned by the Scottish American Athletic Association of the Northern Rockies. The event will have a Scottish Dragon theme this year. Music will be provided by Dave Blackburn’s Boulder Creek Band which also includes Billy Powell, Richard Young, Wayne from the Back Adit Band, and special treat fiddle music by Christian Johnson from the Mission Mountain Band. Throughout the day, also enjoy the Pipes and Drums. The Highland Pipers from California will also be entertaining, as well as The Montana Piper, and the McClures.

Themed foods will include Guinness stew, a pulled pork Porky Hagus sandwich, the Braveheart burger, a Scotty – dog, and Laura’s Breads, with Aunt T’s Coffee Shop assorted items. Alcoholic beverages are available from the restaurant, and Loch Ness Lemonade will also be offered.

For the kids, there will be the Haggis Train, the Bouncing Castle with water slide, the Enchanted Tunnel of Mist, the Bouncing House, Face Painting and Hair Braiding.

For more information see the Facebook website for the Kootenai Highland Gathering, call Tammy at 293-5140, Angie at 291-0825 or Dee at 291-6939. The River Bend Restaurant Field is located along Hwy. 37 North, out of Libby just passes mile marker 13. Admission to the event is by Donation. 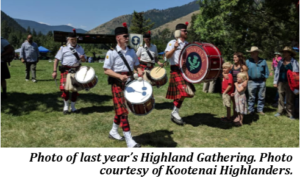