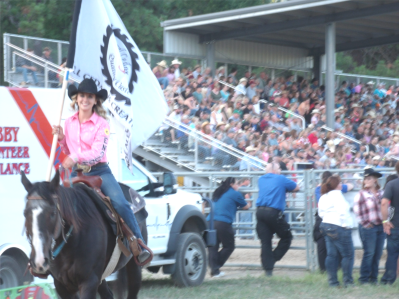 On a beautiful Saturday evening, July 27th, the Professional Rodeo Cowboys Association event in Libby, Montana began with the National Anthem’s of Canada and America. All were quiet and respectful. Announcer Brent Jordan added a short prayer for the safety of all the participants, and that all spectators would make it home safe. He also asked for the protection and safe return of all United States military personnel fighting for our freedoms overseas. Outside looking west, the sublime silhouette of the Cabinet Mountains shown. And inside the outdoor arena, all was placid.

The term Rodeo was reportedly first coined around 1914 meaning any public entertainment show of horse-riding skill. It is supposedly taken from Spanish rodeo – for cattle roundup (1834), or pen for cattle at a fair or market. It’s literal translation is from Spanish meaning going around, to go round or surround. The term is also related to the Spanish rodare, or to revolve. Modern Spanish rodeos evolved to focus on style, whereas American versions focus on speed.

As far as origins of American cowboy hat styles go, men on horseback have been wearing broad-brimmed hats as far back as the Mongolian Horsemen of the 13th century. It is likely the more modern working cowboy hats, with the wide brims and high crowns were adapted from the Mexican Vaqueros, meaning a cowboy or herdsman. Enter then one John B. Stetson, with his design. Stetson’s hat, was nicknamed the Boss of the Plains, and was first manufactured in 1865. The wide brim could whip a horse; fan a fire; and offered protection from the wind, rain, and sun. Hats evolved over time, and adding a curved up brim on the sides kept it staying out of the way of a rope, and a pinched crown allowed better control of the hat.

In the 1920’s, rodeo began to organize to combat problems of the rapid expansion of the sport. In 1929, the Rodeo Association of America was formed, made up of rodeo committees and producers who selected World Champions in bronc riding, bull riding, bareback riding, calf roping, steer roping, Bulldogging, team roping, and wild cow milking. By 1955, the newly formed Rodeo Cowboy Association was the main Rodeo Association. Modern cowboys and cowgirls travel thousands of miles to compete in up to 125 rodeos per year in an effort to qualify for the richest rodeo in the world, the National Finals Rodeo. Unlike other professional athletes, cowboys are not guaranteed a paycheck. Cowboys pick which rodeo they want to enter, then pay their travel expenses and an entry fee in order to compete. Only if they perform well will they get a paycheck. It’s a serious business, dangerous, and worthy of respect.

This reporter learned a few things from my cowboy buddies back in the day. While elk hunting in 30 degrees below zero weather, walk the horse up the drainage the four miles to where you tie off the horses to begin your hunt. That way, you stay warm and it saves the horses energy. With some horses that mis-behave, a cupped hand smack behind the neck will straighten them out. With others one must be real careful, for the first chance they get they will try to get even. One Sorrel waited patiently until her rider was glassing the southwest winter range slope intently for elk, and then walked the hunter on her back directly towards an overhanging Ponderosa pine limb about six inches in diameter that would have put a hurting on his head. Also that certain Spanish expressions yelled loudly at your mount can definitely get a reaction. When my riding partner thought I had finally gotten a grip on horsemanship, he tested me by screaming A’ndale Arriba Arriba at our horses and they instantly reared up and took off at a full gallop and did not stop until they reached the watering hole a mile away. The three lessons learned there were: hold on for what it’s worth; the expression meant Come On Go Go; and that humility is best learned when pride is at it’s peak.

The first event at J. Neil’s Park outdoor arena was the Bareback Riding. With horses named Bombs Away, and Bald Lie, all knew it would be interesting. The guys faces were strained as they raised one arm over their heads and held on for dear life. And when your holding only a rigging of a leather and rawhide strap with no stirrups, and your feet are above the horses shoulders, it’s no easy task. And eight seconds can sure seem like a mighty long time. The events kept coming and the time flew by. There was steer wrestling, team roping, the Alberta miniature chuckwagon introductions, and saddle bronc riding that all kept the crowd entertained. In between events, the rodeo clown Clint Selvester kept us all laughing, especially the little cowboys and cowgirls. Cassie Turner, who was the 2018 Darby Rodeo Association Queen proudly and skillfully displayed our flag as she did laps around the arena as they announced upcoming events. Cassie competes in barrel racing in high school rodeo. There was also a beautiful moment captured by sharp eyed observers when Cadee Williams, after successfully competing in the break away roping event, escorted her mount out of the arena. Upon reaching the outer corrals and dismounting, she was immediately gently handed her year and a half old daughter Honor Lane Williams by her husband Landon Williams, who was off to compete in the tie down roping event. This behind the scenes exchange was touching and showed the strength of character of the athletes.

Precision skills were witnessed in the ladies barrel racing, and the dangerous challenges of riding up to 2,000 lb. bulls are hard to describe in words. Things wrapped up with the miniature chuckwagon races. The crowd seemed pleased and thankfully none of the participants were seriously injured. The next day this reporter talked with the Kootenai River Stampede Committee President Patty Rambo, who explicitly asked this humble correspondent to mention the above and beyond efforts of Secretary / Treasurer Trisha Davis Stacy, whom I also thanked for her efforts. Walking away, the grounds were immaculately cleaned, all was quiet, and the mountains loomed in the distance.