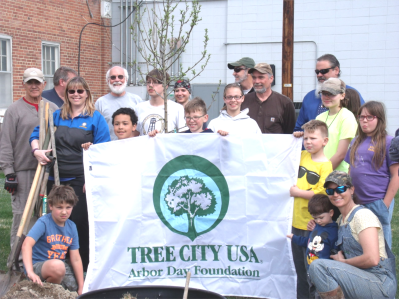 “Arbor Day is not like other holidays. Each of those reposes on the past, while Arbor Day proposes for the future.” This quote from J. Sterling Morton emphasizes his hopes for his idea to set aside a day for planting and calling attention to trees. Morton and his wife Caroline moved to the Nebraska Territory in 1854. The then relatively sparse landscape was thin on tree cover, and the couple wanted to encourage tree planting to improve the environment and beautify the landscape. Their idea became a reality when on April tenth, 1872, Nebraska, by then a state had planted one-million trees. The Morton’s home in Nebraska City was called Arbor Lodge. In 1885, Nebraska declared J. Sterling Morton’s birthday, April twenty – second as Arbor Day.

In Libby on April 26th, members of the Libby Tree Board, retired Forest Service foresters, leaders and members of the Pathfinders Group, and adult advisers and members of the Webelos Scouts joined efforts to improve Libby’s environment  and beautify our landscape. Together, the group planted five deciduous ornamental trees adjacent to the Libby City Police building, and two near the City Post Office. The group with a chronological range of eight to 78 years of age, combined efforts and got the job done just before the rains and wind kicked in. The Pathfinder kids included: Rachel Thornton; Keannah Wooden; and Esther, Andrew, and Hannah Mercill. The Webelos worked hard too, under the guidance of Abel and Rebecca Guerra.

With planning efforts organized by LTB Chairwoman April Rainey, and some solid work by all, the trees were beautifully planted and the folks had fun. Our local tree board is looking for a few good men and women to join the group. If interested, please call April at: 406-291-6937.