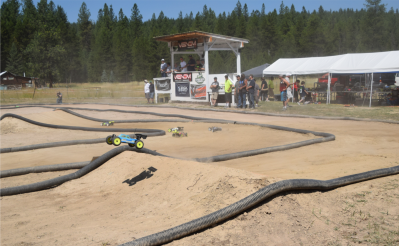 Troy Douthit of the Kootenai  RC Racers admits he is a nerd, and that this thriving remote control racing club is full of grown men and women who just want to play with toy cars.

Begun in 2013 by Sam Shear of Shear Brothers Hobbies, and Libby City Council member Gary Beach, the club set up their first track out at J Neil’s Park. Soon there after a supporter offered the club some land out on Snowshoe drive, and the club members, with some design help from Matt Dormund from Sandpoint, built a sweet track, a place to practice and hold local and regional competitions.

Now, again with Dormund help, the club members are busy building a brand new track  adjacent to the kids fishing pond at the Kootenai  Business park.

“Our club members are building the track, with an amazing design from Matt” Douthit told the Montanian.

The Kootenai RC racers now have 37 active members, made up mostly of adults.

“Kids are really good at it from all that practice with video games, at our last competition a 19 year old guy from Spokane wiped the floor with all of us” Douthit said with a grin.

“These little cars are a tenth or an eighth the size of life-size dune buggies, which we like to think are modeled after our cars” Douthit added.

Cars start at about $250, but once you get your first car , you can use it to swap out parts, like electronics and tires.” Douthit told the Montanian, “Yearly dues are just $20, $10 for youth and $30 for the whole family, and  race fees are  only $10. This sport has huge family appeal, and we are one of the biggest clubs in Montana. The clubs in Sandpoint and Spokane have nice tracks, and the club down in Missoula is actually following our lead here in Libby.” Douthit explained.

With the generous support of Riley Construction, the Kootenai RC Racers will be out in force these last few weeks of summer creating  exciting new track and  seating area in an area near the children’s fishing pond but accessed from a different road.

Now’s the time to catch the end of summer action and help take this sweet local club to the next level of regional competition. For more info , stop in Shear Brothers hobbies. Or call  them at (406) 293-9362