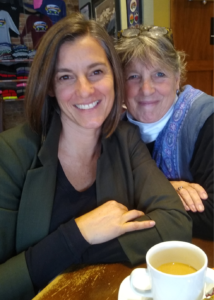 Cora Neumann and her mom Nonnie Thompson.
By Moira Blazi, The Montanian.

Last Sunday, Montana Congressional candidate Cora Neumann, made a quick stop in Libby. First meeting with voters at Treasure Manor, then at Cabinet Mountain Brewery, Neumann, and her mom, Nonnie Thompson, took a few minutes to speak with The Montanian.

Neumann was born and raised in Bozeman, but left when she was only 12, because her family just couldn’t afford to live in Montana anymore. “I’ve been hearing, all over the state, how Montanans who have lived here for generations, can’t afford to stay,” Neuman said. Her family, including Neumann and her husband eventually made it back to Montana, but not before Cora was able to earn a Master’s degree from Columbia and a Ph.D. from Oxford University. “The reason I pursued these degrees, was not to make lots of money, but because I wanted to have as many tools and skills as possible to open doors for Montana families,” she continued.” I don’t think higher education is necessarily for everyone, it’s access to good jobs and relevant education, that helps Montanans thrive.”

Neuman has used her knowledge and training to start We are Montana in 2019, a non-profit focused on improving  health care for Montanans. “Health care is not just about access to doctors and clinics,  I grew up hunting and eating wild game, and harvesting from the land, and, as a Montanan, I know that it’s also about living with clean air and water.” But, with the size and wild nature of our state, access to quality health care can still be a problem for many rural residents. “My dad was a logger, and he died in a sawmill accident up in BC”, she recalled. “If he had been closer to a hospital, he would have lived. What happened to my dad shouldn’t happen to anybody.”

Although she is a fourth generation Montanan, Neumann is comfortable on the global stage. After hearing about how a group of African First Ladies were working for their communities, Neumann convened an International summit for First Ladies, including Laura Bush, Michelle Obama, and Roseland Carter, and started the non-profit Global First Ladies. “I just don’t take no for an answer,” she said with a grin. “Especially when it comes to the dishes,” added mom Nonnie.

Hoping to become Montana’s second congressional delegate to Washington, Neumann is planning to continue crisscrossing  the state, listening and observing . ”I would like for there to be someone in Washington D.C. who understands Montanans,” she added. “Someone who grew up here and knows what Montana families go through.”

Troy Trojan basketball is back, ready, and preparing for a successful season

Troy Trojans Varsity Basketball is back for the 2021-2022 season and both the boys and girls programs are looking to flip the script from last year. The Girls team will be coached by Cynthia Franke who will be starting her first-year coaching for the Troy School District and taking over a program that has been on the decline for the past couple of years. Justin Young will be returning to coach the boys basketball team for the fourth time, this will be his eleventh season coaching in the Troy basketball program.

“It’s good to be back in my hometown” said Head coach (HC) Franke who played for the Lady Trojans 22 years ago. HC Frankie’s will begin her era of coaching in Troy by rebuilding the girls’ basketball program from the youth level to the high school level by reteaching the fundamentals of basketball. “My goal is to focus on the basics, strengthen the fundamentals, proper conditioning, and build confidence. I think if we keep that as the foundation, success will eventually follow,” she said. HC Frankie will face a similar problem this year that the Trojans boys HC Young had last year with having to play eighth graders to field a full team.

The boys varsity basketball program will look to improve on last year’s one win season with returning upperclassmen Michael Foote, Tyler Munts, Paxton Fisher, and Trevor Grant. Last year HC Young had to bring up eighth graders to field a full team as turnouts were low, with only seven high school boys signing up last year. This year however HC Young is anticipating twenty high school boys will be trying to make the varsity cut.

“The overall program goals are to develop the boys basketball abilities, teach them teamwork skills, represent the community in a positive manner, and have some fun along the way. As we get a few practices under our belts we will talk as a team about what goals we want to set for ourselves this season. Overall though, we just want to become better basketball players, and people every time we enter the gym.” said HC Young.

The boys and girls first games will be against Thompson Falls on Saturday, Dec. 4 in Troy.