Guns or marijuana, but not both

According to the federal Gun Control Act of 1968,

are prohibited from possessing firearms

“The Gun Control Act (GCA) prohibits a person who uses a controlled substance from possessing a firearm or ammunition.”

McCoy further noted that the Bureau’s position is longstanding. She cited a 2011 open letter penned by Arthur Herbert, the Bureau’s Assistant Director of Enforcement Programs and Services, offering guidance on the subject. “Marijuana, as mentioned above, is listed in the [Controlled Substance Act] as a Schedule I controlled substance … and Federal law does not provide any exception allowing the use of marijuana for medicinal or recreational purposes, even if authorized by state law,” Herbert wrote at the time.

McCoy additionally cited a 2011 case in which S. Rowan Wilson, a medical marijuana patient in Nevada, claimed in court that the policy violated her constitutional rights. In 2016, the 9th Circuit Court of Appeals ruled against Wilson and in favor of the U.S. Department of Justice and ATF.

In Montana, enforcement of the policy largely hinges on self-reporting, since the state is prohibited from tracking marijuana customers or putting them on a list. The Montana Department of Revenue and Department of Justice both declined to provide comment for this story. DOJ suggested contacting a federal agency.

Violations of the law are punishable with a fine of up to $10,000 and a jail sentence of up to 10 years.

As the libertarian Reason Foundation points out, the policy is unlikely to change until either marijuana is DE scheduled from the list of federally controlled substances or the Gun Control Act is amended to include exceptions for medical marijuana patients or states with legal marijuana markets. 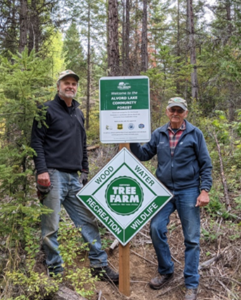 The use of prescribed fire was identified in the original management plan as a means to re-invigorate decadent shrubs and grasses, for the benefit of restoring wildlife browse. However, the logistical challenges posed by this activity has been reconsidered. Since much of this property was ‘high graded’ under the previous ownership, there is an overarching goal to begin a restorative effort to regenerate  ponderosa pine and western larch in small, plantable openings. This spot planting of containerized seedlings is planned for the spring of 2022.

“The Alvord Lake project is a great example of the balance that can be attained between protecting sensitive wildlife habitat and maintaining traditional, productive uses of large, rural private parcels, “ says Ryan Lutey, Vital Ground’s executive director. “The property will stay in private ownership and continue to contribute to the local tax base, remain productive from a forest resources perspective, and provide public access to an important recreational area.”

Being so close to the community of Troy, Alvord Lake is a favorite fishing, boating and site for outdoor education for the schools.  But it’s much more, too.  The lake provides one of the state’s few nesting sites for common loons, its mid-elevation shoreline serves moose and elk as favored winter range, and its setting on the southern edge of the Purcell Mountains—a range that stretches north into vast Canadian wild lands—helps connect sensitive grizzlies, Canada lynx and wolverines with habitat cores farther south in the Cabinet and Bitterroot ranges.