Another successful year for the Outhouse Races held in Yaak Town 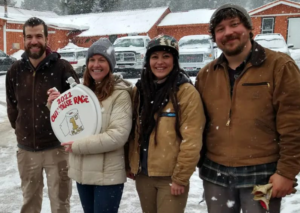 On Sunday February 20 the Famous Outhouse Races were held in Yaak Town. This event started at 2 p.m. in the Dirty Shame Saloon south lawn. Seven teams participated in the race this year. The 150-yard track fit two outhouses side by side and had a tricky corner to navigate before the finish line. A snowstorm blew into town for the event and added a slick layer of snow for the outhouses on skis to glide with ease. Each team was geared up with outfits, helmets, and boot grippers to anticipate the win.

The race rules were stated as 1. Build an outhouse, 2. Minimum size 3’x4’x6’ (tall), 3. Push bars on each side, 4. Toilet seat and toilet paper, 5. Mount it on skis, 6. Push it to win (three to a team), Yaktrax are permissible no corks. A crowd of fifty plus community members of all ages attended the event, to be entertained by the outhouse showdown. The competitors lined up at the start line, looking over the competitions carpenter skills, and sizing up the other competitors. With the finish line in sight, the races began. Cheers, hoots, and hollers were sounding off once the races started.

Making their way up the competition bracket, the Yaak Councilors took the win! Literally cutting it close, the Yaak Councilors built their outhouse the morning before the race, the team was filled with excitement and honored to win the race. They were awarded a custom painted toilet seat. The Brown Trout’s won best in show with their stylish matching outfits, custom built outhouse, and skilled emoji work. “This outhouse took two weeks to build, with lots of planning and shared beers” said the brown trout team. Their team was also awarded a custom painted toilet seat.

This event was held by the Yaak Tavern and Mercantile and Dirty Shame Saloon. This event was a great way to bring locals together for some winter fun, and good old fashion competition. The full-service Tavern and Mercantile and Dirty Shame Saloon are equipped with gas, groceries, a full bar and menu, hunting and fishing licenses, ice, off sale liquor, cabin rentals, and so much more. 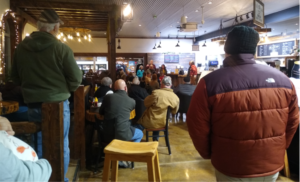 Organized by an informal group of residents, including Mike Fantasia, Mark and Shawna Moore, Tami Jellesed, and Blanche and Stan Hudsen, the meeting featured Fantasia giving an overview of the project and resident questions and concerns, including contaminated groundwater, increased traffic on Hammer Cutoff Road, air quality, and the impact on visitors staying in air B&Bs in the area.

The Montanian attended the neighborhood meeting as well as visiting with Levi Thompson, of  TCI to address some of the residents concerns.

“There’s been no discussion on the impact on groundwater and our wells” Fantasia told the crowd.

He said folks were wondering about how the volume of water used would impact their wells, and about potential pollution.

Meeting attendees expressed concern about chemical contamination in the underground river that flows through much of the area.

Others suggested residents obtain tests of the water in their wells, and some expressed concern over water rites.

When asked about these concerns Levi Thomson of TCI first clarified that the proposed facility is a gravel extraction pit not an Asphalt plant. “Although we checked ‘all the boxes’ on the application, we have no plans to put in an asphalt plant at this location” Thompson told the Montanian.

Thompson said he did not believe the companies excavation efforts would go deep enough to impact ground water.

Another big concern was the increased traffic of heavily loaded trucks and noise on the short connector Hammer Cutoff road. Fantasia told the crowd that he projects the project could produce approx. 1,800 truckloads per year, and that he did not think that Hammer Cutoff Rd. would hold up well under this traffic. Several in attendance agreed that this was also a big concern for them.

Thompson told the Montanian that the company was planning to use Farm To Market Rd. as well as Hammer Cutoff to transport gravel out of the area, and that he anticipated approx. 2-3 truckloads per day (approx. 730 -1,100 loads per year).

Finally, a concern about the general quality of life in the neighborhood, specifically the potential impact of increased noise and air quality on residents who host travelers and tourists with air b& bs.

Thomson replied that the residences are spread widely apart and that he and his family live in the area as well, and  he wasn’t concerned about their quality of life being affected.

The proposal itself is available for public review. For more info contact Levi Thompson at TCI or Tami Jellesed.