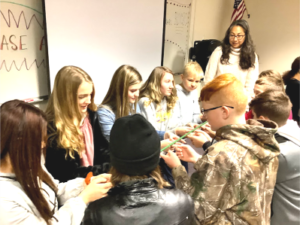 The week after the 7th grade field trip, the sophomore class visited Eastern Washington University in Cheney. Upon arrival, they were led around campus by EWU students who were able to speak to their own experiences there. Students were shown many of the buildings dedicated to specific areas of study, as well as dining and lounge areas, the library, the bookstore and student services locations. After the tour, sophomores ate lunch among EWU students in their sports-themed restaurant, The Roost, located in the University Recreation Center. Students were able to explore all the gear in the bookstore below, and could elect to go with chaperones to see the Eagle’s red-turfed stadium, Roos Field. After lunch, all sophomores sat in on a presentation by EWU’s visitation coordinator. Like the presentation at NIC, students were given information about college in general, finding the right fit for them, and the types of programs, services, and activities EWU in particular offers.

Before November break, the freshman class had their field trip to FVCC’s main campus in Kalispell and satellite campus in Libby. In Kalispell, freshmen toured campus with FVCC faculty. They were able to walk through a residence hall, the library, buildings dedicated to the various areas of study, student services areas, and see FVCC’s bookstore. During the tour they learned about life at FVCC and the academic and extracurricular opportunities offered, including FVCC’s popular Logger Sports. After the tour, students ate lunch on campus, a meal that was cooked by FVCC’s very own culinary department. To shake things up and make things fun, students then rotated through three activities. In one activity, they learned how to extract strawberry DNA. In another, they toured the Occupational Trades building and took turns on a CDL simulator and another simulator where they were able to virtually move logs by heavy machinery to a designated area. The third activity involved a photo scavenger hunt challenge in which they made their way around campus completing photo challenges (e.g. create your own yoga class outside Founders Hall, play group leap-frog, etc.).

At Lincoln County Campus the following week, students were able to participate in four different sessions put on by FVCC instructors. These experiences allowed students to get an idea of what instructors and a few areas of study are like at FVCC. During the communication session, students broke into groups to work through a “Helium Stick” activity in which they all had to use two fingers each to hold and lower a rod to the floor as a team. During the nursing exercise students learned about the equipment nursing students use and had the opportunity to listen to their partners’ pulses and breathing through stethoscopes. In psychology, students took a survey to see what kind of personalities they had, and in the last session they learned about college in general. They were then able to sit in on a student panel and hear directly from LCC students.

Overall, GEAR UP Liaison Deanna Malyevac and Assistant Liaison Liz Marty traveled over 1,300 miles throughout the course of the field trips. GEAR UP looks forward to another round of excellent college visits next year! 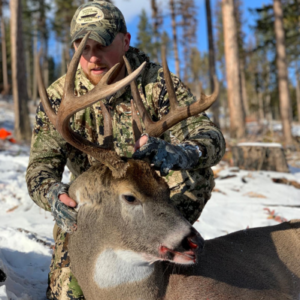 Despite lack of major snow and warmer than average temperatures, the white-tailed deer buck harvest was relatively good in our area.

More specifically, at Canoe Gulch Check Station just outside Libby, there were 1,842 hunters checked in, compared to 1871 in 2018. The news was that the overall take of 97 white-tailed deer was above the 2018 harvest number of 45. White-tail bucks were actually almost double the 2018 count, with 61 bucks taken this year compared to 34 in 2018.

Mule deer totals were double last years numbers with 36 this year versus 18 the previous year. Elk numbers at the gulch station were about even, with 12 taken this year, and 10 last year. The percentage of hunters with game was about doubled also, with 7.9 % this year compared to 3.9 % last year.

Of course, one must consider this is only one check station that is only open weekends. Also, that this winter MTFWP will conduct harvest telephone surveys and compile overall statistics which will help fine tune the numbers. With reference to Canoe Gulch station trends, in talking with this reporter Regulations Information & Education Program Manager Dillion Tabish of MTFWP said, “It was a good season, some nice bucks were taken along with 12 elk.”

And there certainly were some beautiful white-tailed bucks taken, especially in the Yaak. This reporter was fortunate to talk with Tim Linehan, veteran hunter. Tim and his wife Joanne Candler Linehan own and run Linehan Outfitters in the Yaak.

When asked what factors he attributed to his companies success during this season, Linehan said, “We were successful this season for a variety of reasons. We had a few more game cameras on the ground which are very helpful in patterning game. Also, we started to see rut activity a bit earlier than usual so we adjusted our strategies and started doe talking and rattling a bit more than we normally would have.”

When this reporter remarked that many white-tail bucks were apparently very healthy looking, Linehan told The Montanian, “My crew and I and many others agreed that the white-tails were in particularly good shape this year. We can all assume that was due to moisture. We had good moisture spring, summer, and fall, and succulent food was available everywhere.” When asked about buck ages in general, Linehan said, “We did a higher percentage of mature bucks this year as well. We were especially pleased with that since we had been seeing lots of young bucks in 2017, and 2018, and had hoped they were surviving.”

There are definitely other rewards of hunting besides some of the more tangible ones such as meat and a nice rack.

In regards to these rewards, Linehan said, “We go hunting. It’s never a guarantee but it facilitates many more enjoyable and satisfying emotions that include anticipation and ultimately hope. That may be the best thing I like about hunting. When I hit the ground and take that first step into the woods my whole world changes. Everything slows down and it’s the only time my mind is quiet. And every minute thereafter, I’m hopeful and there’s no better feeling.”

When this reporter asked about comments from clients regarding these intangible prizes, Tim said, “A couple of years ago I had a client tell me something particularly poignant. He hunts hard, understands that success is never a given, and loves the back country. We got back to the truck and he told me the best thing about hunting with me was that he always learned something about himself. I found that interesting.”