Plummer Preschool Graduation Day 2021
“They came in as caterpillars and are leaving as beautiful butterflies!”

Plummer Preschool Graduates of the Libby Public School District took their walk across the rainbow bridge this past Friday morning, June 4, and set flight for their future.  As is tradition, each preschooler first donned the pair of wings they had personally designed for the transition to their kindergarten years and then joined their teachers and friends in releasing butterflies they had raised in the classroom this Spring.  (Photos Courtesy of Kiersten DeWitt) 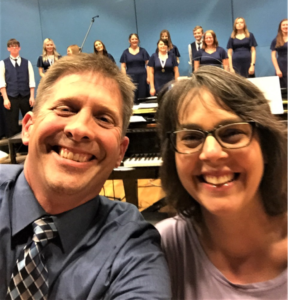 Superintendent of Libby Schools,
Ron Goodman and his wife, Lisa, were serenaded by the Libby High School Choir as they sang the classic
1969 tune “Sugar, Sugar” during their
Tuesday, June 1, end-of-the-year
performance onstage at the
Memorial Events Center.

Photo courtesy of Goodman, taken as 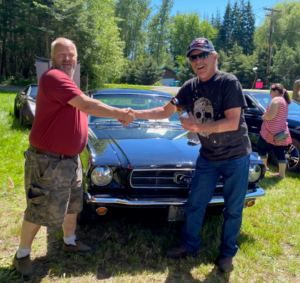 Above:
Patrons admire and vote for the 2021 entries at the Halfway House Car Show on Memorial Day Weekend.

Left:
Gary Rantala
of the Libby Igniters  shares a handshake with one of
the Kalispell
Outlaws in front of the 2021 Classic Car 1st Place Winner—a Ford Mustang owned by Starr Williams of Libby.

The Halfway House
Bar and Grill of Bull Lake hosted their now-annual
Memorial Day weekend car show on Sunday,
May 30.

The event was very well attended, quickly
running low on space to park. Next year, event
organizers plan to hold the show in their larger campground area behind the bar.

Vehicles of all makes, models, and years were
welcomed and judged within two categories –
Classic (pre-1990) and 1990-present. Winners were determined by people’s choice process. Attendees purchased tickets to drop and place their vote buckets placed by each entry.

Funds raised were then donated to Parent Teacher Associations in Troy, Libby, and Noxon.

The winners in the Classic Car category were
Starr Williams with her 1965 Ford Mustang, followed by Debbie Moore with her 1937 Ford pick-up and
Jeralyn Jones with her 1967 Chevy Chevelle.

In the 1990- present category, the winners were Tracy McNew with her 2015 Dodge Challenger,
followed by Dan Gall with his 1998 Cadillac and Tim Rooney with his 2017 Mustang.

Libby’s Igniters Car Club and Kalispell’s Outlaws of the Flathead had both showed up in force and enjoyed some friendly Lincoln vs. Flathead County rivalry. An upcoming show at Happy’s Inn will bring the two clubs head to head again and Libby’s club hopes to win the trophy this year.