Locals came out and showed their appreciation for all that Cabinet Peaks Medical Center and the Libby Care Center has done for the community during this pandemic. The Hug the Hospital event was held on Saturday November 20.

The event was steer headed by Pastor Karen Disney who wanted to thank the Hospital for all the care it has given to our community. Somebody told her that they did a similar thing down in Bozeman, and she was inspired. Her husband , Lee, has recently been released from Cabinet Peaks Medical Center.

“ You were there for us, so we are now there for you” Lee Disney told the Montanian when referring to CPMC.

Disney (Pastor Karen)  enlisted the support of John  Cheroske, associate at Geo-Copters, a local video production company,  to record the event from the air.

Over  100 folks showed up and spread around the entire perimeter of the large building. Although not enough people to actually hold hands around the entire building, folks stood about 6 feet part, with hands outstretched and hearts open toward the hospital building.

“It was a spontaneous gift to the hospital and all of the caregivers” said Disney. 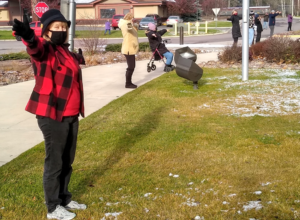 Laurie Walsh and other participants hold hands out wide to show their appreciation for the hospital and the Libby Care Center.
Photo by Moira Blazi, The Montanian.

Here are 8 fun facts about

The first Thanksgiving was celebrated in 1621 over a three day harvest festival. It included 50 Pilgrims, 90 Wampanoag Indians, and lasted three days. It is believed by historians that only five women were present.

Turkey wasn’t on the menu at the first Thanksgiving. Venison, duck, goose, oysters, lobster, eel, and fish were likely served, alongside pumpkins and cranberries (but not pumpkin pie or cranberry sauce!).

The history of U.S. presidents pardoning turkeys is patchy. Harry Truman is often credited with being the first president to pardon a turkey, but that’s not quite true. He was the first to receive a ceremonial turkey from the National Turkey Federation – and he had it for dinner. John F. Kennedy was the first to let a Thanksgiving turkey go, followed by Richard Nixon who sent his turkey to a petting zoo. George H.W. Bush is the president who formalized the turkey pardoning tradition in 1989.

There are four towns in the United States named “Turkey.” They can be found in Arizona, Texas, Louisiana, and North Carolina.

The average number of calories consumed on Thanksgiving is 4,500.

More than 54 million Americans are expected to travel during the Thanksgiving holiday this year. That’s up 4.8% from last year.

Thanksgiving Jokes for the Whole Family

“Why did they let the turkey join the band?” “Because he had his own drumsticks.”

“What happened to the turkey that got in a fight?” “He got the stuffing knocked out of him!”

“Why did the farmer have to separate the chicken and the turkey?” “He sensed fowl play.”

“What did Han Solo say to Luke Skywalker on Thanksgiving?” “May the forks be with you.”

One last glimpse of fall. Taken by drone over Bull Lake by Wayne Page just a few short weeks ago before the snow and blistering cold hit Lincoln County.