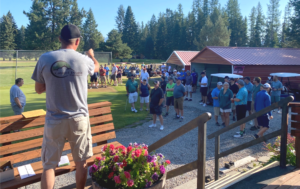 Tony Rebo of the CPMC Foundation explains the rules as the

(All photos by Tracy McNew) 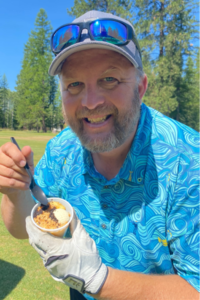 Above: Bruce Weatherby chips from an elevated platform on hole number 8.

Zach McNew enjoys his sand trap themed
dessert. Lunch
was provided to participants during the event.

Once again, a little bit of fun went a very long way. The 2021 Cabinet Peaks Medical Center Foundation’s “Playing for Fundsies Golf Tournament” has come and gone. In its wake over $26,000 raised and left for the Cabinet Peaks Foundation.

The 28th Annual brought an energetic and fun group of golfers out for another round of fun which included unique twists and turns throughout the course.

Games and prizes took place on every hole. Everything from
a toilet tee-off to using a cue stick to strike their mark. Golfers
could be seen using string in place of putting and multiple
mulligans were granted in play. Over 80 golfers showed up for
the excitement.

“The CPMC Foundation Board is thrilled with the results of
the tournament once again this year,” commented Allye Anderson,
Executive Director of the Foundation. “We are always looking
for ways to make the event stand out in a summer full of golf
tournaments and to make it as enjoyable as possible, too. The games do not slow the players down and it’s awesome to have
prizes available at every hole; the combination adds up to more excitement on the course, more winners at the end of the day,
and more dollars raised for a fantastic cause!”

A total of 20 individuals and five teams collected cash prizes. 18 separate hole prize winners received $50 cash. Contestants were only allowed to take home one prize, with the exception of the putt-offs and 1st through 5th place teams. If a player won two or more prizes during the course of the regular tournament events, they received one $50 bill, and the extra cash prize was raffled off to the rest of the players
who were present.

“We want to thank all of the event contributors, as well as the volunteers and golfers who came out to spend this day with us,” added Anderson.  “Every single one of you made this event a success, and we are truly grateful for your support.”

to the water front crowd—(continued…) 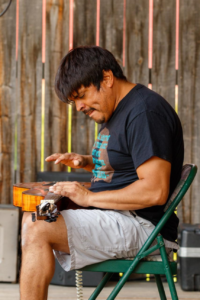 Dan Dubuoque provided the smooth and
soulful sounds of his Weissenborn Slide Guitar as a part of the entertainment to be heard at this past weekend’s Yaak River Festival held at the Yaak River Mercantile. (Photo by Sara Harrell)

That concert completely changed Dan’s focus and from that night on he worked to get his own Weissenborn guitar and started to foster a newly found style from his heart, through his fingers, and to our ears.

Dan now plays full concerts all around Montana. He has also flown out of state for private parties, to play at racetracks and to perform at other high
profile events.

Dan is extremely down-to-earth; you feel like you could talk to
him forever.  He’s just comfortable to be around. Very laid back even as his life appears to be kicking into high gear. I asked Dan what the biggest question is that he gets while on the road – besides “what kind of instrument is that?”  He laughed and then replied, “Are you Indian?”

We giggled and I then asked, “So Dan… are you Indian?”

We laughed again
and then he shared,
“I am South American Indian, French, German and Danish. My Mom is full blooded Aymara
Indian from the Andes Mountains of Bolivia.”

“And now you’ve been growing up on the Montana Rez here in the Flathead, that’s pretty well rounded,” I told him. He agreed, then added
that the Salish and
Kootenai Tribes have given him an edge to his music and he is happy to call the Flathead Valley his home after being flown around the U.S. in his early youth. Though he said it is getting to be a bit over-crowded there.

In closing, I asked Dan if he would like to give any advice to other young musicians wanting to get gigs and starting on a musical path in life. Dan smiled warmly and said, “If you’re a musician, play with all your heart, and humiliate yourself or go home. Say, ‘This is me!’ Put all your flaws and qualities out there. I’m a warrior, to be a great musician is to be a great fighter. If you meet up with me and you’re doing it wrong I’ll call you out on it.” Given his drive to create, I imagine he doesn’t mind being called out himself. Challenged to improve the impeccable connection he values with his audience.

To learn more about Dan Dubuque, you can find him online at:
https://www.facebook.com/dandubuquemusic