1683: German immigrants founded Germantown in the colony of Pennsylvania, becoming the first major immigration of German people to America.

1876: The American Library Association was founded in Philadelphia.

1927: The Jazz Singer, the first feature-length motion picture with synchronized dialogue, was released, heralding the commercial ascendance of ‘talkies’ and the decline of the silent-film era.

1945: “The Curse of the Billy Goat” was supposedly placed on the Chicago Cubs when Billy Sianis, owner of the Billy Goat Tavern, and his pet billy goat were ejected from Wrigley Field during Game 4 of the 1945 World Series because some fans complained about the goat’s odor. Outraged, Sianis angrily declared, “Them Cubs, they ain’t gonna win no more,”  which has been interpreted to mean that there would never be another World Series game won at Wrigley Field. The Cubs have not won a National League pennant since this incident and have not won a World Series since 1908.

2014: Teresa Romero, 44, a nurse in Madrid, Spain, became the first person in the world to contract the deadly Ebola virus outside of western Africa. (She contracted it while treating two missionaries who had been flown home to Spain after contracting the disease in West Africa. She made a full recovery.)

1826: The Granite Railway, from Quincy to Milton, Mass., began operating as the first chartered railway in the U.S.

1959: USSR probe Luna 3 transmitted the first ever photographs of the far side of the Moon. Born this day: actor Dylan Baker (Planes, Trains and Automobiles), and Simon Cowell (creator of The X Factor and Britain’s Got Talent).

1904: Edmonton, Alberta, and Prince Albert, Saskatchewan, were incorporated as cities.

1921: The first live radio broadcast of a football game occurred over KDKA at Forbes Field, Pittsburgh.

1956: Don Larsen of the New York Yankees pitched the only perfect game in a World Series, one of only 21 perfect games in MLB history.

1974: Franklin National Bank of Long Island, N.Y., collapsed due to fraud and mismanagement. It was the largest bank failure to date in the history of the United States.

1604: Supernova 1604 occurred in the Milk Way and became the most recent supernova to be observed with the naked eye.

1701: The Collegiate School of Connecticut (later Yale) was founded in Old Saybrook, Connecticut.

1992: A 28½-pound fragment of a meteorite landed in the driveway of the Knapp residence in Peekskill, N.Y., destroying the family’s 1980 Chevrolet Malibu.

1911: Whisky distiller Jack Daniel died from blood poisoning as a result of an infection in one of his toes. (The toe had become infected after he injured it while kicking his safe in anger because he could not remember the combination.)

1971: The reassembled London Bridge officially opened in Lake Havasu City, Ariz. Robert McCulloch had bought the bridge from the British government in 1962 for $2.46 million. He had it disassembled and moved by ships and trucks to Arizona.

2002: Mike Taylor,  the Republican candidate for U.S. Senate against Montana Democrat Max Baucus, dropped out of the race 26 days before the election after TV ads revealed he had been involved in defrauding the U.S. government when he was operating a beauty school in Colorado in the 1990s.

1492: Christopher Columbus made landfall on one of the islands of the Bahamas, believing he had reached East Asia.

1792: The first celebration of Columbus Day in the United States was held in New York City.

1810: The first Oktoberfest  was celebrated in Munich, Germany.

1892: The Pledge of Allegiance was first recited by students in many U.S. public schools, as part of a celebration marking the 400th anniversary of Columbus’ voyage.

1928: The negative-pressure ventilator, a.k.a. “iron lung,” was used for the first time at Children’s Hospital in Boston.

1933: The U.S. Justice Department acquired the United States Army Disciplinary Barracks on Alcatraz Island for use as a federal prison.

Montana History with “The Eagle” 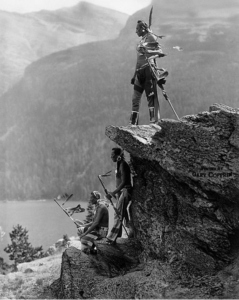