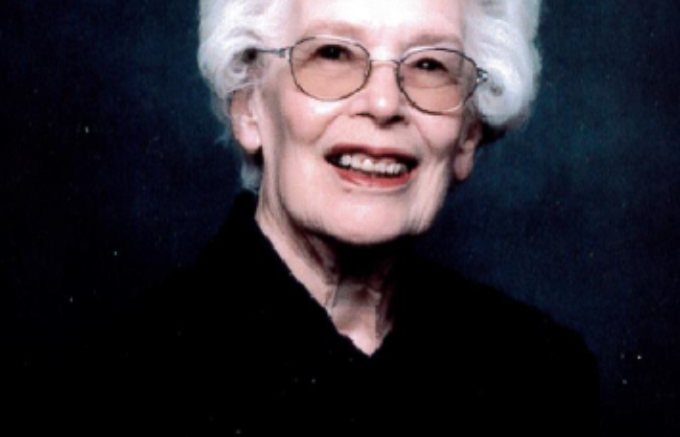 Helen G. Peterson, 91, beloved mother, went peacefully to heaven to be with her savior Jesus on Tuesday, July 30, 2019, at the Libby Care Center.

She was born Feb. 3, 1928 to Clarence and Eleanor (Notman) Swimley in Kalispell, Mont., the eldest of three children. Her brothers were Ralph (Bud) and Hugh Swimley.

In 1941, Helen’s family moved to Libby from Epping, North Dakota and lived at 414 Nevada Ave. Helen graduated from Libby High School in 1946. She worked at the library and the county offices until she met and married Clifford L. Peterson in 1948 in Libby. Helen and Cliff lived in a small cabin, built by Cliff, where they raised their four children, John, Pam, Anne, and Tom. Cliff built a new home next to the cabin at 1312 Main, where they lived most of their lives. Cliff worked at the local lumber mill until retirement. As a housewife and mother, Helen was involved in her children’s activities. She was a devoted member of the Libby Presbyterian Church.

When her children were older, Helen worked as a clerk for the lumber mill, and then as a finance clerk for the Kootenai National Forest until her retirement.

Helen enjoyed the outdoors with Cliff and her children. She loved to hike, fish, and camp. She was a gardener and she loved to read. She and Cliff took many trips together all over the world and the U. S.

When Cliff died of cancer in 1997, Helen made a new life for herself. She was a volunteer at the Heritage Museum and the Libby Care Center. She remained active in her church. She continued to travel with family and friends. Helen was proud of her mother’s Scottish heritage. She traveled to Scotland with her daughter Pam in 1999.

Helen’s greatest joy was her family. Her love for Cliff, her children, grandchildren and great grandchildren was unending. Helen will be sorely missed by her family and friends who love her deeply.

Helen was preceded in death by her parents, husband, and brothers.

Services will be held at 12 noon at the Libby United Methodist Church, 713 Main Ave., on Saturday, August 10. Online condolences and memorials may be shared at www.schnackenbergth.com