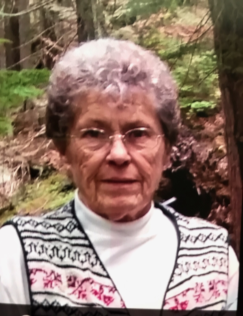 Maxine (Mickie) Kay Vanderhoef Sena Cote, passed away peacefully on Sunday, Sept. 1, 2019 in Kalispell, Mont.  She was born Oct. 19, 1934 in Mohall ND, the middle child of Farrell and Lucille Vanderhoef.

During WWII their father was in the Navy and their mother worked in the shipyards in Vancouver, Wash. Mickie, her brother Kenneth, and sister Babe, lived with their grandparents and went to school. After the war, the family’s early years were spent in North Dakota and Montana.

In 1952 Mickie graduated from high school in Miles City, Mont. She met Herman Sena and they were married March 25, 1953. Their son, Ivan, was born in Billings, Mont, in 1954; daughter Kathryn was born in Lovell, Wyo. in 1955. The new family moved between Wyoming and Montana settling in Libby, Mont. in 1962. Herman went to work logging in the woods. Mickie first worked at Bolyard’s Grocery Store then at the mill office of J. Neils. When the Libby Dam construction started many people remembered Herman and Mickie managed the Super America Store. She went to work at Rosauers and retired after many years of service. Herman passed in 1999 after 46 years of marriage. She then married Lionel Cote and they enjoyed retirement until he passed in 2010. Mickie moved to Kalispell, Mont. to live with her daughter and be close to her grandchildren. In July, Mickie went to Alaska for a ‘Sena Family Reunion’ arranged by her granddaughter Jennessee. All of her Montana family and Alaska family had an unforgettable and memorable time. We could not love a mom, sister, grandmother, and great grandma more than her.

Services will be at 2 p.m., on Saturday, Sept. 14  at Schnackenberg Funeral Home in Libby and a reception will follow. Online condolences and memories may be shared at www.schnackenbergfh.com. In lieu of flowers, Mickie’s family requests donations to a charity of your choice.