1780: A combination of thick smoke and heavy cloud cover caused complete darkness to
fall on Eastern Canada and New
England of the United States at 10:30 a.m.

2019: US billioniare Robert
F. Smith announces he will pay off college loans of nearly 400
students of the graduating class of Morehouse College, Atlanta.

1609: Shakespeare’s sonnets
were first published in London by the publisher Thomas Thorpe.

1899: The first traffic ticket in the U.S. was issued when New York City taxi driver Jacob
German was arrested for driving 12 miles per hour on Lexington

1983: The discovery of the HIV virus that causes AIDS was published by Luc Montagnier in the journal Science.

1881: The American
Red Cross was established in Washington, D.C., by Clara
Barton.

1932: Bad weather forced Amelia Earhart to land in a
pasture in Derry, Northern
Ireland, and she thereby became the first woman to fly solo across the Atlantic Ocean.

1934: Oskaloosa, Iowa,
became the first municipality in the United States to fingerprint all of its citizens.

1934: Bank robbers Bonnie and Clyde (Bonnie Parker, Clyde Barrow) were gunned down in an ambush near Sailes, Bienville Parish, Louisiana,

2018: Hamburg, Germany becomes the first city to ban
diesel cars on some roads.

2019: The last slave ship to smuggle slaves to America from Africa, the Clotilda (sunk 1860), is found in Mobile River, Alabama.

1883: The Brooklyn Bridge
in New York City was opened
to traffic after 14 years of construction.

240 B.C.: The passage of Halley’s Comet was first recorded.

1953: The first public television station in the United States
officially began broadcasting as KUHT from the campus of the University of Houston.

1999: The U.S. House of
Representatives released the
Cox Report, which detailed the People’s Republic of China’s
nuclear espionage against the United States over the prior two decades.

Portraits of Mildred Walker and Joseph Medicine Crow Two and information about their fascinating lives are now hanging in the Gallery of Outstanding Montanans in the West Wing of the Capitol in Helena.

Ten inductees were chosen in 2016 for the gallery, but only two are initiated every biennium. The gallery was established by the Montana State Legislature in 1979 to pay homage to Treasure State citizens who “made contributions of state or national significance to their selected fields while epitomizing the unique spirit and character that defines Montana.”

Joseph Medicine Crow was a war chief, historian, and mentor. Born in 1913 in Lodge Grass, he eventually became the first member of the Crow tribe to earn a master’s degree in 1939.

In 1943, he enlisted in the U.S. Army and served in Europe during World War II. In the Crow tradition, he went into battle wearing war paint beneath his uniform and a yellow eagle feather inside his helmet. He then fulfilled the four traditional acts needed to become a war chief: touching a living enemy; taking an enemy’s weapon; stealing an enemy’s horse; and leading a victorious war party. 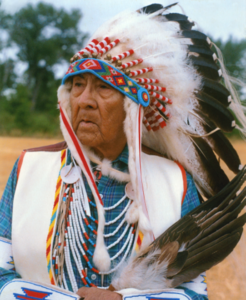 After the war, Medicine Crow worked as a land appraiser with the Bureau of Indian Affairs for 32 years, while also serving as the Crow tribal historian and anthropologist.

Eventually, he became the foremost authority on Crow history and culture. One of his greatest legacies was how he lived his life, and he encouraged Crow youths to embrace their identity, understand their ancestral heritage, and see their stories as relevant.

“I have lived in two worlds; one is a traditional Crow Indian way and at the same time I have lived like a modern American. I can mix the two, blend the two, get the best from each, and enjoy life living in both worlds,” he said. Medicine Crow died in 2016.

Mildred Walker was born in Pennsylvania in 1905, and earned a master’s degree in English. She was so enthralled with writing that she married in 1927 on the conditions she could continue her writing career, and not have to do laundry. 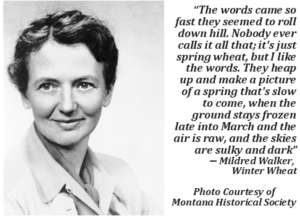 Her family moved to Great Falls in 1933, where they lived for 22 years. While in Montana, she wrote nine of her 13 novels, with four set in Montana. Critics praised Walker for her ability to capture ordinary human experiences and authentic environments for her characters. She showcased a modern, unromanticized version of Montana.

“Writing, to me, is one way of living and savoring life more deeply … a cup in which you can lift life to the lips and taste it – even if the cup is sometimes a battered tin one,” she said. Walker died in 1998.