1998: The U.S. Supreme Court ruled that Ellis Island, the

of immigrants, is mainly in

the state of New Jersey, not New York.

Will Power becomes the first Australian driver to win the event.

2019: World’s rivers widely contaminated with antibiotics according to new global study of 711 sites.

1503: England and Scotland signed ‘A Treaty of Everlasting Peace,’ resulting in a peace that lasted 10 years.

1937: The Golden Gate Bridge in San Francisco was officially opened by President Franklin D. Roosevelt in Washington, D.C., who pushed a button signaling the start of vehicle traffic over the span. German automobile manufacturer Volkswagen was founded.

1999: Leonardo da Vinci’s masterpiece The Last Supper was put back on display in Milan, Italy, after 22 years of restoration work.

2018: One million French smokers quit in one year after anti-smoking measures introduced according to Public Health France.

in The Atlanta Journal.

1868: Decoration Day (the predecessor of Memorial Day) was observed in the United States for the first time.

1911: At Indianapolis
Motor Speedway, the first
Indianapolis 500 ended, and Ray Harroun in his Marmon Wasp became the first winner of the 500-mile auto race.

1922: The Lincoln Memorial was dedicated in Washington, D.C.

1790: The United States enacted its first copyright statute, the Copyright Act of 1790.

William Henry Vanderbilt and opened to the public at 26th Street and Madison Avenue.

“The Karnival Kid,” was

1971: In accordance with the Uniform Monday Holiday Act passed by Congress in 1968, observation of Memorial Day occurred on the last Monday in May for the first time, rather than on the traditional Memorial Day of May 30.

Exchequer Rolls of Scotland, Friar John Cor is the distiller.

Redondo is signed allowing the Navajos to return to their lands in Arizona and New Mexico.

“Sign-Talker with a Straight Tongue”

Frank Bird Linderman (1869 – 1938) carved a notable niche in Western literature by recording faithfully Plains Indian tales, legends, and customs. And, in the end, he succeeded as a writer because “he was Doer before he was a Teller.”

Linderman was born on September 25, 1869 in Cleveland, Ohio but moved to Montana’s Flathead Valley when he was only 16. After enjoying a variety of careers – including trapper, cowhand, assayer, newspaper editor and politician – Linderman, with his wife and three daughters, moved to the west shore of Flathead Lake in 1917. There he devoted his full attention to writing. Before his death in 1938, he published 5 volumes of traditional Native American lore, 2 trapper novels, 2 recorded Indian biographies, one volume of poetry, a juvenile nature tale, and numerous periodical pieces.

Linderman had been a friend of Montana’s Native American people since his earliest days in the state (even playing an instrumental role in the establishment of Rocky Boy’s Reservation for the Chippewa and Cree in 1916). In his writing about these peoples, Linderman proved to be a perfectionist. He diligently interviewed tribal elders, and always checked his interpreter’s translation through his expert use of sign language. Frank Linderman may have begun as an amateur ethnographer, but his publications exhibit a writer of immense integrity, clarity, and humility – an absolutely trustworthy observer and recorder, a “creative listener.”

The “Sign Talker with a straight tongue” was adopted into the Blackfeet, the Cree, and the Crow tribes. His biography of the great Crow Chief Plenty Coups, American (1930) remains a classic that reveals the confidence placed in Linderman by Montana’s Indians.

Plenty Coups concluded: “I am glad I have told you these things, Sign-Talker. You have felt my heart, and I have felt yours. 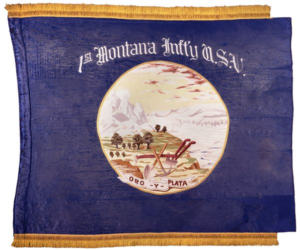 In 1895, Colonel Harry Kessler (1844–1907) – commander of the state’s National Guard – had this flag made to serve as a traveling trophy to be awarded to the most “exemplary company at the conclusion of the annual summer encampment.”

At the onset of the Spanish-American War three years later, the men of the First Montana Volunteers chose this flag (with the inscription added above the state steal) as their regimental colors and carried it with them to the Philippines.

Upon their return in 1899, the flag was proudly displayed around the state and when, in 1905, the Montana legislature selected an official state flag,
the Kessler Banner (minus the inscription) was an obvious choice to serve as its prototype.

The design remained unchanged until 1981 when Rep. Mel Williams of Laurel sponsored a bill to add
the word “Montana” above the state seal to help
differentiate it from similar-looking state flags.