1979: Charlie Daniels Band releases “The Devil Went Down to Georgia.”

1664: Colony of New Jersey founded when Duke of York grants Lord Berkeley. and Sir George Carteret ownership of land between the Hudson and Delaware Rivers.

253: St Lucius I begins his reign as Catholic Pope.

512: A solar eclipse is recorded by a monastic chronicler in Ireland.

The Snowstorm
Lead Mine is near Troy, Montana.

Historically the site has been associated with the Troy Mining District which is now part of the Kootenai National Forest.

The site was first
discovered in 1911.

The Snowstorm Lead Mine was closed at the time of data entry with no known plans to re-open.

Mine operations
consisted of underground workings. There is one known shaft. Subsurface depth reaches a maximum of 300 meters (984 feet) and extends 3,000 meters (9,843 feet) in length.

Ore mined was
composed of pyrrhotite, chalcopyrite and pyrite with waste material
consisting primarily of biotite, quartz and calcite.

Associated rock in this area is quartz monzonite from the Pliocene epoch 5.33 to 2.58 million years ago. 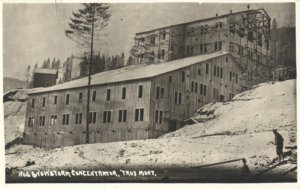 The Northern Rocky Mountains physiographic province of the Rocky Mountain System
characterize the
geomorphology of the surrounding area.