1438: King Charles VII issues
the Pragmatic Sanction of Bourges stating that a General Church Council with superior power to the Pope must be
held every 10 years.

1891: Marcellus F. Berry, an American Express employee is granted four copyrights for what he called “the travelers cheque.”

1776: Colonel John Nixon gives the 1st public reading of the
Declaration of Independence
to an assemblage of citizens in Philadelphia.

1947: Reports are broadcast
that a UFO has crash landed
in Roswell, New Mexico.

1955: The Russell-Einstein
Manifesto is released by Bertrand Russell in London on the need to avoid nuclear war.

1859: Big Ben’s second and
current bell first chimes from inside the Clock Tower.

1892: US Patent Office says
Joseph Swan rather than
Thomas Edison, invented the electric light carbon for the
incandescent lamp.

1774: Citizens of Carlisle,
Pennsylvania, pass a symbolic declaration of independence.

1861: Wild Bill Hickok reputed to have shot and killed David McCanles, possibly his first kill. Hickok later acquitted after found he acted in self defense.

1916: 3rd and 4th of 4 fatal
Jersey Shore shark attacks occurs at Matawan Creek when epileptic Lester Stilwell (11) is dragged into a creek and Watson Fisher (24), believing Silwell had a
seizure, is bitten while retrieving the body and subsequently bleeds to death 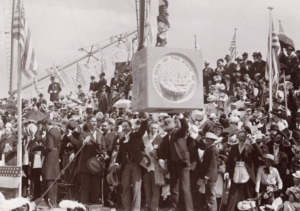 With great fanfare,
the cornerstone for the
Montana State Capitol was dedicated on July 4, 1899. Celebrants came from all over the state and a grand Masonic procession,
music, and speeches highlighted the festivities.
Although the legislature had originally called for the completion of the building by January 1, 1900, delays added three years to the length of this extensive project.
To learn more about this grand building, read the lavishly illustrated book: “Montana’s State Capitol: The People’s House” written by Patricia M. Burnham, Kirby Lambert, and Susan R. Near and published with financial support from the Montana History Foundation.