1827: English chemist John Walker sold the first friction match, which he had invented the previous year.

1829: Joseph Smith Jr., founder of the Latter
Day Saint movement, commenced translating the Book of Mormon,
with Oliver Cowdery as his scribe.

1933: Prohibition in the United States was
repealed for beer of no more than 3.2 percent alcohol by weight, eight months before the
ratification of the 21st amendment.

1865: Workers digging a new water system in Durham, England, inadvertently freed a living toad from a solid block of magnesium limestone 25 feet below ground level. The cavity from which the toad was freed was no larger than its body. The creature lived for some time after that at the
Hartlepool Museum.

1867: The U.S. Senate ratified by one vote a treaty to purchase Alaska from Russia.

1961: The Pacific Electric Railway in Los Angeles, once the largest electric railway in the world, ended operations as the result of a conspiracy headed by General Motors to eliminate public train transportation in the U.S. and replace them with buses.

1967: The Boeing 737 made its maiden flight, piloted by Brien Wygle and Lew Wallick.

1815: The Mount
Tambora volcano in |Indonesia began a three-month-long eruption,
lasting until July 15. The eruption directly killed 71,000 people and affected Earth’s climate for the next two years, including the infamous “Year with No Summer” in 1816.

1866: The American Society for the Prevention of Cruelty to Animals (ASPCA) was founded in New York City by Henry Bergh.

1876: The Benevolent and Protective Order of Elks was organized in New York City

1968: President Lyndon B. Johnson signed the Civil Rights Act of 1968, prohibiting discrimination in the sale, rental and financing of housing.

1976: The Apple I computer was created in Palo Alto, Calif.

1934: The strongest surface wind gust in the world, 231 mph, was measured on the summit of Mount Washington, New Hampshire.

2009: Zimbabwe
officially abandons the Zimbabwean dollar as its official currency.

1976: The U.S.
Treasury Department
reintroduced the $2 bill as a Federal Reserve Note on Thomas Jefferson’s 233rd birthday as part of the United States Bicentennial celebration.

1956: Videotape was first demonstrated in
Chicago.

1969: At the U.S. Academy Awards, there was a tie for the Academy Award for Best Actress between Katharine
Hepburn and Barbra Streisand. 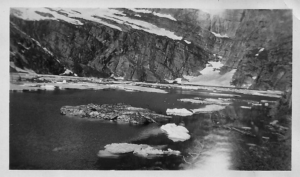 “I used to have youth bible study on top of that mountain overlooking Leigh Lake,” one onlooker stated when this
picture surfaced on a local history page on Facebook. “A pretty good hike up there. Nice picture.”

Libby Native, Mitch Paliga, had been sorting through several images which were once taken by his mother, Joyce, who passed away in 2016.

This photograph of Leigh Lake, southeast of Libby and taken in 1948, was
captured the year Paliga’s parents were married.

Remarkable to many who commented on the image was the glacier captured.
“We used to swim off the ice Glacier
pieces. Never were there this many, though!” commented another.

Joyce Paliga was an active member of the VFW in Libby for over fifty years. She had worked at First National Bank and then the Forest Service.