1494: Christopher
Columbus landed on the island of Jamaica and claimed it for Spain.

1809: Mary Kies
became the first woman awarded a U.S. patent, for
a technique of weaving straw with silk and thread.

1866: Memorial Day was first celebrated in the USA at Waterloo, New York.

1536: King Henry VIII of England ordered that English-language Bibles be placed in every church.

1889: The Eiffel Tower in Paris opened for the first time.

1718: The city of New Orleans was founded by Jean-Baptiste Le Moyne
de Bienville.

1789: The first
inaugural ball was held
in New York to honor
President and Mrs.
George Washington.

2000: Vladimir Putin was inaugurated as
president of Russia.

1978: Climbers
Reinhold Messner and
Peter Habeler made the first ascent of Mount
Everest without
supplemental oxygen.

1974: The U.S. House
of Representatives
Judiciary Committee opened formal and public impeachment hearings against President Richard Nixon in connection with the Watergate scandal.

1869: The First
Transcontinental Railroad,
linking the eastern and western United States, was completed at Promontory Summit, Utah, with a
golden spike.

1872: Victoria
Woodhull became the first
woman nominated for president of the United States.

1908: Mother’s Day was observed for the first time in the United States, in Grafton, West Virginia.

water circumnavigation of the earth.

1962: Marvel Comics published the first issue of The Incredible Hulk.

1987: The first heart-lung transplant took place, in Baltimore, Md. The
surgery was performed by Dr. Bruce Reitz of the
Stanford University School of Medicine.

1996: After the
aircraft’s departure from Miami, Fla., a fire started by improperly handled oxygen canisters in the cargo hold of Atlanta-bound ValuJet Flight 592 caused the Douglas DC-9
to crash in the Florida
Everglades killing all 110 on board.

Whether providing social interaction, intellectual stimulation, or political training; women’s clubs were an

important part of life for Montana’s women. A review of the documents these groups left behind reveals the
integral role these clubs played in the personal development of individual members and the communities in which they lived. Records include correspondence, membership records, minutes, and newsletters.

The following provides a sample from the rich documentary heritage of Montana women’s clubs held by
Montana Historical Society Archives.

The Hamilton Woman’s Club, organized in September 1913, serves as an example of a civic improvement club. The club was initially organized as the Hamilton Mother’s Club in 1913 to study problems relating to homes, babies, and mothers. At the urging of club member Mrs. W. A. McKeown, the club’s name was changed to the Hamilton Woman’s Club in 1913, and in 1914 it became a member of the Montana Federation of Women’s Clubs. The new club adopted as its
purpose, “to promote the higher interests of its members and others, though Philanthropic, Civic, Literary and
Educational work.”

Early in its existence, the club began to pursue civic improvement in the areas of education and health care. In late 1914 club members pursued their first large project. With the assistance of town leaders, they petitioned Andrew
Carnegie for money to build a library and in 1915 the library was completed. The club continued to support literacy and education throughout its over 60 years of service by purchasing children’s books for the library, providing educational programs at their meetings, and sending local girls to various educational programs around the state.

Club women also worked to improve general health conditions in their community. In addition to sponsoring county health services, they instituted hot lunch programs for under privileged children during the 1930s and provided milk in school for undernourished children. The club also organized other health related programs, such as a lazy eye program, providing eyeglasses for the needy, and assisting children with eye and ear problems. They also financially supported larger programs by donating money to state institutions for the deaf, blind, and mentally impaired and by sponsoring children to attend the Montana Special Olympics.

The Hamilton Women’s Club also provided
organizational and financial support for general civic
improvements in their town. They regularly gave money for beautification of the local library building and grounds. Club members also worked to build benches, build and improve parks, and install water fountains throughout the town. In their effort to promote civic
improvement, the club joined other local organizations, including both women’s clubs and fraternal organizations such as the Grange, in joint improvement projects such as those listed above. 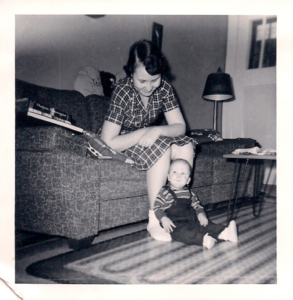 living at the Libby State Fish Hatchery (featured in the April 28 edition of The Montanian), and shared  the above photo of she and her son, Clint (“Moose,” as he was known later in life), visiting the living room at the main hatchery home where her mom, Mora, and step-dad, Lester Newman, lived at the time—1957.

Due to its location, the Libby hatchery was one of the first areas in the Kootenai Valley to receive

well before many other Libby residents.

As a teenager living with her family at the main house in 1954, GelaRae also recalled inviting her

receptionless friends from town to a “T.V. Party.”