1377: Foundation stone laid for Ulm Minster, in Ulm, Germany. Will not be completed until 1890, when it becomes the tallest church in the world.

1859: French acrobat Charles Blondin is 1st to cross Niagara Falls on a tightrope

1871: The decimal currency system is made uniform in

2002: The International
Criminal Court is established
to prosecute individuals for genocide, crimes against
humanity, war crimes, and
the crime of aggression

1776: New Jersey gives the right to vote to all adults who could show a net worth of 50 pounds

1776: Continental Congress
resolves “these United Colonies are and of right ought to be
Free and Independent States”

1937: Spam, the luncheon meat
is first introduced into the
market by the Hormel Foods
Corporation

Break for Independence on Fourth of July Pass 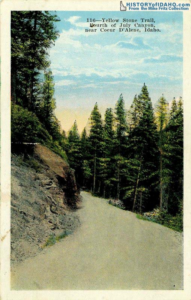 As the Mission of the Sacred Heart was being completed in 1853, General Isaac Stevens, the first governor of Washington
Territory, came through the Northwest with a survey party in search of a northern route for a transcontinental railroad. He assigned Lt. John Mullan with a crew of about 150 men to construct a 624 mile wagon road from Ft. Benton on the Missouri River in Montana to Ft. Walla Walla on the Columbia River in Washington.

The Mullan Road was the first wagon road to cross the Rocky Mountains to the Inland of the Pacific Northwest. It was built
between the spring of 1859 and summer of 1862. It led from Fort Benton, Montana, to Fort Walla Walla in the Washington Territory, and it roughly follows the path of modern-day Interstate-90 through the Rockies.

Mullan Road was designated a historic site by the National
Register of Historical Places in 1975, and the American Society of Civil Engineers designated it a historic civil engineering landmark in 1977.

At this site Captain Mullan and his crew recorded their visit by carving the date into a large Ponderosa Pine tree.

Captain Mullan and his crew celebrated the 4th of July in 1861 on top of this mountain as they took a break from clearing passage for the road they were building over it. Thus the current name of “4th of July pass” today.

Mullan Road was designated a historic site by the National
Register of Historical Places in 1975, and the American Society of Civil Engineers designated it a historic civil engineering landmark in 1977.