1284: The principality of Wales was incorporated with England.

1776: The first amphibious landing of the U.S. Marine Corps began the Battle of Nassau in the British Bahamas during the American Revolutionary War.

1875: Georges Bizet’s opera Carmen premiered at the Opéra-Comique in Paris. The first organized indoor game of ice hockey was played in Montreal, Canada, as recorded in The Montreal Gazette.

1931: Congress passed a resolution naming “The Star-Spangled Banner” the national anthem. (Hail Columbia had been considered the unofficial national anthem before then.)

1938: Oil was discovered in Saudi Arabia.

1519: Hernán Cortés arrived in Mexico in search of the Aztec civilization and their wealth.

1837: The city of Chicago was incorporated.

1917: Jeannette Rankin of Montana became the first female member of the U.S. House of Representatives.

1918: The first case of Spanish flu occurred, the start of a devastating worldwide pandemic; the disease sickened 500 million people and killed 100 million, or 5 percent of the world’s population, and is considered the worst natural disaster in human history.

1995: British singer, composer and eccentric Vivian Stanshall died at age 52 in a fire at his flat in London. He was a founder of the Bonzo Dog Doo-Dah Band, a precursor to Monty Python’s Flying Circus.

1953: Joseph Stalin, dictator of the Soviet Union since 1924, died. (He killed 20 million of his own people, compared to Hitler’s six million.)

1960: Elvis Presley was given an honorable discharge from the U.S. Army.

1975: The Homebrew Computer Club met for the first time in Silicon Valley, California, signaling the advent of the personal computer revolution.

1767: Andrew Jackson, seventh president, was born in the Waxhaw district on the border of North Carolina and South Carolina.

1778: Martha Washington wrote a letter to a friend describing the harsh winter conditions at Valley Forge, which she called “The Great Valley.”

1956: My Fair Lady received its premiere performance on Broadway at the Mark Hellinger Theatre.

1941: The National Gallery of Art in Washington, D.C., was officially opened by President Franklin D. Roosevelt.

1950: Researchers at the University of California, Berkeley, announced the creation of element 98, which they named “californium.”

1996: In Dunblane, Scotland, gunman Thomas Watt Hamilton entered a school and murdered 16 students, all 5 years old, and their teacher before turning the gun on himself.

To answer that 1872 bar room debate: “The Horse in Motion 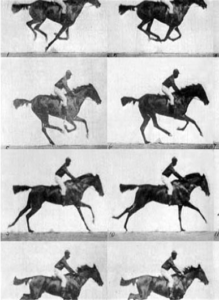 Not exactly the type of high-action, special effects-driven, Braveheart-style, Hollywood blockbusters that graces our cinema screens today, but pretty impressive considering no one ever, in the history of the entire world, had made a movie before.

With modern-day smartphone technology giving us the ability to make a high-quality movie almost instantly, it’s hard to believe there was a time before making a film was simple, cheap, and easy.

In fact, for many years the most engaging motion pictures of the past were the stories told by your parents and grandparents, and later by crackling audio scratched from a large vinyl disk and projected to your ears from a wooden box. Pretty primitive stuff.

But this all changed thanks to the work of one man: Eadweard Muybridge.

His experimentations and endeavors, often funded by generous benefactors, reshaped the possibilities of society and paved the way for what we now consider staples of modern life – easily accessible and digestible visual content.

In 1872, one of the main barroom debates revolved around this question: when a horse is trotting or galloping, are all four of the its feet off the ground at the same time?

The answer to this question is plainly obvious to anyone who has ever seen slow-motion footage of a horse in full flight, but it’s much harder to be certain when the animal is moving at full speed.

In 1872, then Governor of California, racehorse owner and eventual founder of Stanford University, Leland Stanford, decided to settle the debate once and for all.

He reached out to Muybridge, who at that time was a famous photographer, and offered him $2,000 to prove conclusively whether a horse ever engaged in ‘unsupported transit‘.

Muybridge provided conclusive proof of what we now take as common knowledge when he produced a single photographic frame of Stanford’s horse “Occident” trotting with all four feet off the ground.

This initial experiment spurred Muybridge’s interest to capture a sequence of images of a horse in full gallop, but the photographic technology of the time was inadequate for such an endeavor.

Most photo exposures took between 15 seconds and a minute (meaning the subject had to remain still for that entire time) making them completely unsuited for capturing an animal running at full speed. Also, automatic shutter technology was in its very early infancy, making it unreliable and expensive.

Muybridge spent the next six years (partly interrupted by his murder trial) and over $50,000 of Stanford’s money (more than $1 million today) improving both camera shutter speeds and the film emulsions, eventually bringing the shutter speed down to 1/25 of a
second.

On June 15th, 1878, he placed 12 large glass-plate cameras in a line at Stanford’s Palo Alto Stock Farm, set up a sheet in the background to reflect as much light as possible, and rigged the cameras with a cord to fire sequentially as the horse passed.

The results are the 11 frames of the very first movie ever made (the 12th frame was not used in the final movie).

But, having 11 frames shot in sequence doesn’t make a movie. To make a movie, the frames need to be viewed consecutively at high speed. Also a simple feat to accomplish today, but no device capable of presenting these images existed in 1878, so Muybridge created one.

In 1879, Muybridge devised a way to view his famous galloping horse images in sequence at high speed. It consisted of a circular metal housing with slots that held 16-inch glass disks. The housing was cranked in a circular motion by hand and the images from the glass disks would be projected onto a screen.

This projection device was initially named a Zoographiscope and zoogyroscope, but eventually became the zoöpraxiscope.