1976: Korean axe murder incident: 2 US soldiers tasked with cutting down a poplar tree blocking the view of UN observers are killed by North Koreans claiming it was planted by Kim Il-sung in the Korean Demilitarized Zone

1940 British PM Churchill says of Royal Air Force, “Never in the field of human conflict was so much owed by so many to so few.”

1976 “Operation Paul Bunyan” begins in retaliation for the “Korean axe murder
Incident” 3 days prior. 110 troops, 27
helicopters, 3 B-52 bombers are deployed to the Korean Demilitarized Zone to cut down a poplar blocking the view of U.N. observers.

1939 Nazi Germany and the Soviet Union agree the Molotov-Ribbentrop non-aggression pact and secretly divide Poland between themselves, setting the stage for World War II.

June 1916—
Construction started up Callahan Creek, 5 and 1/2 miles from Troy to haul ore from the Snowstorm Mine to the concentrator in town.

June 1922—
Three more miles of
railroad started to access Lane’s Camp #1 so that Sandpoint Pole and
Lumber Company could then haul logs to the mill in Troy. (Timber sale was 87,000,000 board feet)

Eventually, the railroad was 12 miles long and ended at the South Fork and Glad Creek located in Idaho.

May 1927—
The concentrator at
the Snow Storm Mine burned to the ground. 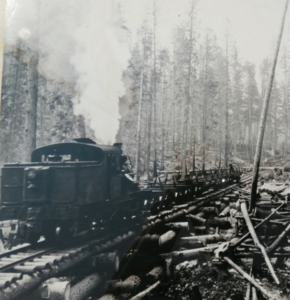 “Step back in time and visit
the thriving mining and logging community that was Troy.”

Pack a lunch, wander the
nature trail , challenge yourselves to a game of disc golf
on the world-class
Timberbeast Folf Course.
(Restrooms Open) 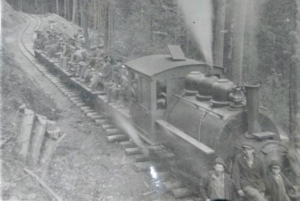 ABOVE: The Snowstorm
railroad construction train returning to Camp 1 at 5:00 p.m. after a day’s work of building a railroad grade from Troy to the Snowstorm Mine up Callahan Creek. Camp 1 was the company’s main camp, located in Troy where the new mill was being constructed. Photograph
taken by Mrs. L.W. Erlwen in November of 1916, which appeared in the Troy Echo on December 1, 1916. Mr. Erlwen and his two sons are shown on the locomotive pilot (bottom right corner).