1875: Captain Matthew Webb makes the 1st
observed and unassisted swim across the English Channel in 21 hours and 45 minutes.

1873: First free kindergarten in the U.S. started by Susan Blow in Carondelet, a suburb of St.
Louis, Missouri.

1918: Spanish flu arrives in Boston, beginning of the second wave and deadliest wave in the U.S.

1948: 102°F highest temperature ever recorded in Cleveland in August.

1884: First known photograph of a tornado is made near Howard, South Dakota.

1833: Britain’s 1st Factory Act becomes law
“to regulate the Labour of Children and young Persons in the Mills and Factories of the United Kingdom.”

1791: Thomas Jefferson responds to Benjamin Banneker’s letter on the issue of slavery.

1911: The “Sullivan Act” requiring New Yorkers to possess licences for firearms small enough to be concealed comes into effect 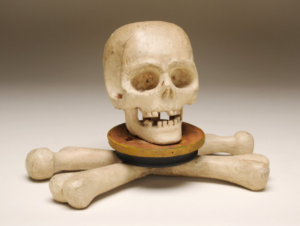 “We have some quirky artifacts
in our collection, including this
carving by Father Anthony Ravalli (1812-1884).
The beloved priest ministered to both Indians and non-Indians alike, from the time of his
arrival in the
Bitterroot Valley
in 1845 until his death in 1884.
An accomplished sculptor, Father Ravalli created this wooden carving around 1870 as a memento mori — a convention in art dating to the Middle Ages — to
remind viewers that death was inevitable but adherence to Christian principals in this life ensured Paradise in the next.
Father Ravalli, whom one biographer termed a “pioneer-architect-sculptor-craftsman-physician-priest,” was born in Italy and schooled there in theology, medicine, mathematics, chemistry, philosophy, mechanics, architecture, and art before Father Pierre-Jean De Smet enlisted him to work among the Indians of the Rocky Mountains.

Since time immemorial, Montana’s First Peoples have fashioned natural materials such as bone, porcupine quills, shells, and stone into decorative ornaments to adorn clothing and other possessions. European explorers and fur traders
introduced glass beads and beading traditions to North America in the 1600s, often via existing intertribal trade networks. 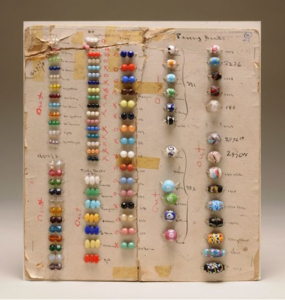 By the 1820s, trading posts throughout the West stocked European-manufactured beads, a prized trade item among the region’s indigenous
peoples. Glass beads were aesthetically pleasing and easily incorporated into
indigenous designs. Unlike quills, beads required no preparation to apply and could be re-used.

Sample cards were used
to show customers the variety
of beads a trader had in stock. This card came from Browning’s Sherburne Mercantile, which operated on the Blackfeet Reservation from 1896 to 1942. With limited access to
natural materials during the late-1800s and the wide
availability of glass beads, Native artists became known for producing the spectacular beadwork still associated with Plains Indians today.