1793: Tennis is 1st mentioned in an English sporting magazine.

1829: The first units of the London
Metropolitan Police appear on the streets of the British capital.

1954: The first remake of “A Star Is Born”, starring Judy Garland & James Mason premieres at the Pantages
Theatre, Los Angeles.

1659: Robinson Crusoe is shipwrecked (according to Daniel Defoe).

1946: 22 Nazi leaders, including
Joachim von Ribbentrop and Hermann Goering, are found guilty of war crimes and sentenced to death or prison at the Nuremberg war trials.

1868: “Little Women” by Louisa May Alcott is published in America by
Roberts Brothers of Boston.

1891: Stanford University, California opens its doors after being founded by Leland Stanford and his wife Jane with a $40M donation (1891 dollars),
in memory of their son. Among its first graduation class, future US President Herbert Hoover.

1552: Conquest of Kazan by Ivan the Terrible.

1789: George Washington transmits the proposed Constitutional amendments (The United States Bill of Rights) to the States for ratification.

1872: Phileas Fogg sets out on his
journey as depicted in Jules Verne’s “Around the World in Eighty Days.”

1849: American author Edgar Allan Poe is found delirious in a gutter in Baltimore, Maryland under mysterious circumstances; it is the last time he is seen in public before his death.

1883: The Orient Express departs on
its first official journey from Paris to Istanbul.

Members of the organization named
Veterans of Foreign Wars (VFW)
today hold a long-standing history of
volunteerism in their communities.
Not only have they served their country, but they continue to serve their fellow
veterans, families, and communities by sponsoring scholarships, career fairs, mental wellness
campaigns, and so many more excellent services.

On the first Friday in October, World Smile Day devotes a day to smiles and spreading random acts of kindness.

Get one, two or three on National Taco Day. October 4
recognizes the savory tortilla stuffed with fillings. It doesn’t
have to be Tuesday, so get out
and enjoy your favorite. 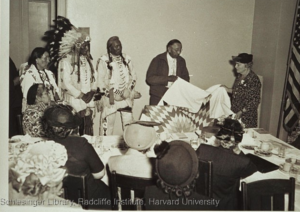 Henrietta Crockett receives star quilt from tribal members in gratitude for her advocacy work with the Montana Tuberculosis Association.
Photo: Schlesinger Library on the
History of Women in America,
Radcliffe Institute, MC433-359-2

We are living at a time when our community
public health nurses and their staff are critical to
the health and safety of our communities. As was true in most states, women in Montana were slow to be awarded positions in public education and public health—though eventually became leaders in both.

By 1950, Montana had one public health nurse for almost each of its fifty-six counties. Many became leaders in their field and influenced public health policies. Pioneering public health nurse Henrietta Crockett was also executive secretary for the
Montana Tuberculosis Association and led the state’s efforts to eradicate that disease. Virginia Kenyon became the Public Health Division director for the State Board of Health and represented Montana’s nurses in state and national professional organizations.

Among Crockett’s accomplishments was the
construction of a medical wing dedicated to Native Americans at the state tuberculosis sanitarium in Galen, which had previously excluded American
Indians. In 1949, tribal members presented her with a star quilt in recognition of her advocacy. 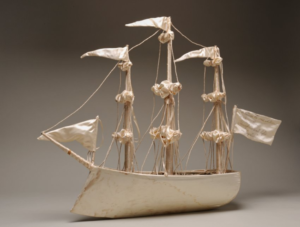 Whereas most Montana brides had to economize during the Great Depression, families who could afford lavish weddings indulged.

Marian Holter, “daughter of one of Montana’s most highly esteemed families,” and Phillip Barbour, both of Helena, married on June 20, 1931, in the elegantly
decorated St. Peter’s Episcopal Church.

This “ship of matrimony” held a place of honor at the reception. The satin-covered centerpiece, saved from the bride’s parents’ wedding 31 years earlier, sports a pennant reading “Whatever the wind, whatever the weather henceforth we sail life’s seas together.”

WHAT DO YOU THINK ABOUT HISTORIC PRESERVATION 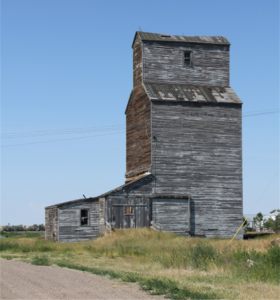 Help the Montana Historical Society’s Historic Preservation Office identify emerging
preservation issues and share your opinions about how to better promote and facilitate historic preservation across the state.

Your input will be used to help prioritize issues, strategies, goals, and objectives in the
2023 Montana Preservation Plan. The survey will remain open until midnight, September 30, 2021. We appreciate your participation as we capture Montana preservationists’ diverse
perspectives!