1492: The oldest meteorite with a known date of impact, the Ensisheim meteorite, slammed into a wheat field around 12 noon near the village of Ensisheim, Alsace, France.

1665: The London Gazette, the oldest newspaper still in print, was first published.

1786: The Stoughton Musical Society, the oldest choral association in the United States, was founded in Boston.

1916: Jeannette Rankin (1880-1973) of Missoula, Mont., became the first woman in the world elected to a major parliamentary body, the U.S. House of Representatives.

1630: An immense flock of passenger pigeons darkened the skies over Boston.

1889: Montana was admitted to the United States as the 41st state.

1960: John F. Kennedy (1917-1963) defeated Richard Nixon (1913-1994) in one of the closest presidential elections of the 20th century, and became the 35th president of the United States. (Kennedy won Illinois, and its electoral votes that swung the election in his favor, by about 6,000 votes delivered by the Chicago mob, which had connections to his father.)

1994: For the first time in 40 years, the Republican Party gained control of both the U.S. Senate and House of Representatives.

1620: Pilgrims aboard the Mayflower sighted land for the first time at Cape Cod, Massachusetts.

1861: The first documented football game in Canada was played at University of Toronto.

1906: Theodore Roosevelt (1858-1919) became the first sitting president of the United States to make an official trip outside the country. He did so to inspect progress on the Panama Canal.

1967: The first issue of Rolling Stone Magazine was published, in New York City.

1775: The U.S. Marine Corps was founded at Tun Tavern in Philadelphia by Samuel Nicholas (1744-1790), considered to be the first Commandant of the Marine Corps.

1970: For the first time in five years, an entire week ended with no American combat fatalities in Vietnam and Southeast Asia.

2002: Seventy tornadoes were recorded in one day in the United States.

2006: The National Museum of the Marine Corps in Quantico, Virginia, was opened and dedicated by President George W. Bush (born 1946).

1889: Washington was admitted as the 42nd state of the United States.

1918: World War I ended when Germany signed an armistice agreement with the Allies in a railroad car in the forest of Compiègne, France. The fighting officially ended at 11:00 a.m. (the 11th hour of the 11th day of the 11th month) and is commemorated annually with a two-minute silence.

1921: The Tomb of the Unknowns was dedicated by President Warren G. Harding (1865-1923) at Arlington National Cemetery.

1912: The frozen bodies of Robert Falcon Scott (1868-1912) and his men were found on the Ross Ice Shelf in Antarctica; an ice cairn was erected to mark the location. 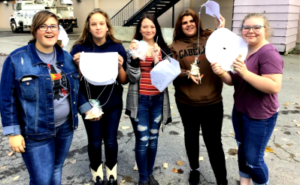 On October 22, students in physical science classes tested their “Care Package Prototypes” that were designed to protect an egg from an approximately 50 foot drop. Constraints such as limited materials, time, and budget, made the design of the prototypes challenging. The weather throughout the day changed from cold and cloudy to rainy to sunny with afternoon wind. Each weather event added a new variable to the drop. Eleven out of 52 prototypes successfully protected their egg from breaking. Students in Ms. Rose’s classes would like to thank Flathead Electric’s Challis Crismore, Cody Katzer and Max Holter who donated their time and the use of their truck to make the drop possible. Pictured is Allie Sanderson, Jolee Kurle, Genevi Reatz, Shelby Graves and Chloe Applebee with their care package prototypes.  Shelby and Genevi’s prototypes were successful. Jolee and Allie’s prototype nearly worked as their egg sustained minor damage. Submitted by Renee Rose.

Businesses and individuals decorated 12 bras. The bras were displayed at local businesses for the month of October.  The fundraiser is named after former Libby Floral and Gift employee, Deborah Schad,  who died of breast cancer in 2010. This year’s fundraiser donated $788.51 to paint it pink. Thanks to everyone who decorated a bra and to all those who donated cash in the cans. Courtesy of Libby Floral and Gift.

The vendors from last  year’s Winter Expo pose in front of the Heritage Museum.

Built from the salt of the earth, or more appropriately the saw dust of the woods around scenic Libby, Montana, the Heritage Museum’s log building was raised by the local community. The project was conceived in 1973, planned in 1975, and opened in 1978. The effort was accomplished with the help and coordination of many groups including: St. Regis Company; Montana Arts Council; Montana Bicentennial Commission; Lincoln County Board of Commissioners Levy; U.S. Forest Service; private businesses, and local community folks. The larch and douglas – fir timbers came by way of the blood, sweat, and tears, of the area peoples. The trees were felled, skidded, loaded, bucked, notched, peeled, chinked, and laid to form the building after the foundation was poured. The resulting structure, an impressive log building is a twelve sided, 130 foot diameter museum. The museum’s mission is to preserve and interpret the history of Lincoln County, and northwest Montana.

According to Erica Hardgrove, who assists with the planning, “This is a seasonal event that combines direct sales and craft show, retail businesses, and a raffle all in one historical aspect environment to benefit the museum. Also, all profits from the bake sale will go to the Model T Fund, and other profits will go to the museum’s general fund.”

Potential Christmas gifts will be offered for sale, with a wide variety of arts, crafts, and goodies from mostly local artisans and crafts people. For example, Linda Bauer will have some home decor items for sale and all kinds of Chalk Couture Bundles that would make nice gifts for friends or relatives. Kelsey June Fenn is excited to share Young Living Essential Oils. That booth will have an assortment of delicious scents from Christmas Spirit to Lavender, to Orange and many more. Check out Erica’s Fizzy Bath Bombs from Elk River Soap Company, as well as her stocking stuffers, and holiday hostess gifts. Kayla Friss will have her Kayla’s Book Nook set up at this Winter Expo, with a variety of books for children of all ages. Kyna Orr will have her Iron Orr Kids Concessions stand set up with special treats.

Olivia Renae Costilla will be selling artwork that will include paintings, drawings, bookmarks, and coloring books. Amanda Dompier will offer scents and fragrance mist, candles, and other products. Amanda Schulze from Camp Creek Coffee Roasters, which is locally owned and operated will have gourmet coffee, and a meet and greet with the new owners.

Kelli Jarrett will be sharing Neora with everyone at the event, and they have anti-aging and skin care products. They also have plant based supplements. The mom and daughter team of Pearl Kisses Rustic Creations will offer custom handmade glitz tumblers, rustic dreams creations and more.

Enter the raffle, and also check out the Heritage Museum bake sale table. All sales from the table go to the museum’s Model T’s Fund. Enjoy the Winter Expo 2019 coming Nov. 8 and 9, pickup some unique gifts, and support our local museum that was conceived and built by our hearty community members.