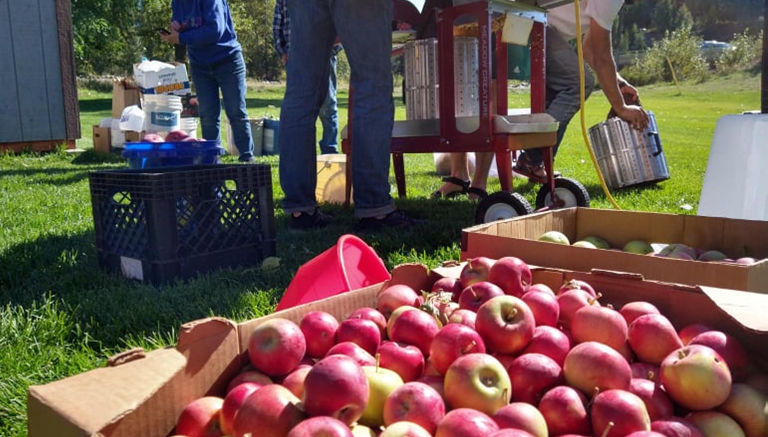 The Troy Farmers Market hosted their annual Apple Festival on Friday, Sept. 24. The event was held at Troy’s Museum and Visitors Center, where the local communities were brought together to celebrate the harvest season. The venue was full of vendors, educational booths, and activities for families of all ages. Live music by the Back Adit band engaged  attendees with upbeat music and lots of dancing. A pie contest had numerous entrees and was a huge hit this year. Pie was sold by the slice, and hardly any was left by the end of the event.

Troy’s Apple Festival was created to celebrate the local food network and fruit growing heritage along with educating the public about bear awareness. As locally grown food readies for the harvest, wildlife become more present in human established areas. Learning to coexist on our mountain landscape allows human- bear conflict to be reduced.

The expanded farmers market was full of fresh grown vegetables and fruit along with baked goods and tasty snacks. Locals were able to sell locally made body care products, crafts, and fine art. Over 80 families attended the event to enjoy the music and festivities.

The Apple Press provided by the Yaak Valley Forest Council was in full swing, pressing over 40 gallons of locally picked fruit. Pressing fresh cider allows community members to harvest their apples and enjoy cider throughout the winter season. The press was managed by volunteers from Curly Creek and enjoyed by many.

Troy’s Apple Festival continues to grow each year, and the planning for the next year’s celebration is already underway. 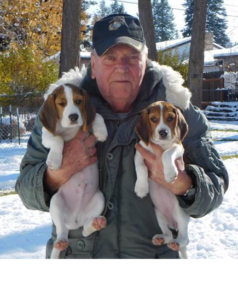 Libby resident Bill Lafrance and his two dogs, Bentley and Blossom, who are being recognized as VFW #StillServing heroes for their service to country and community. Photo courtesy of Michelle Cheesm

The former commander of Troy’s VFW Post 5514, Bill Lafrance, and his dogs Bentley and Blossom, who helped save his life two months ago, are being recognized in the national Veterans of Foreign Wars #StillServing campaign. The campaign honors veterans who continue to serve after the military, and this past month has included canine companions in honor of National Service Dog month.

Lafrance is a wounded combat veteran who served two tours with the Marines in Vietnam and has been giving back in his community since. At his VFW Post he is known as “Mr. #StillServing”  he says he owes his ability to give back to his two beagles, Bentley and Blossom. In July, after mowing his lawn Lafrance came inside and made it as far as the hallway when his heart stopped. His wife was still outside doing yard work and would not have known anything was amiss except that Bentley and Blossom began howling incessantly. Having been alerted, his wife called 911 and emergency responders were able to resuscitate him.

Lafrance is passionate about helping veterans and he is very involved in VFW Post 5514 in Troy, where he served as commander this past year. He enthusiastically donates his time to veterans’ issues, making presentations, recruiting post members, and most recently, greeting Montana Governor Greg Giaforte at the VFW annual state convention in Lewistown this past June.

Lafrance knows that without Bentley and Blossom, he would not be here today to #StillServe, calling the one-year-old beagles his “two little heroes.”

The wheels on the Bus 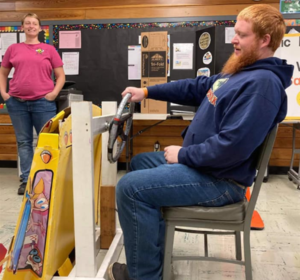 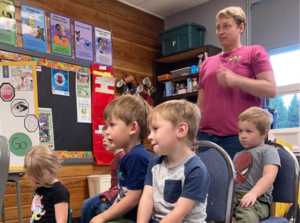 Every class at Plumber Preschool got to experience bus safety last week with their super fun, Ms. Chris, running the show. One class even had the help of a preschool dad/volunteer/Policy Council member. Hang on, kiddos! If you want to know more about volunteering and/or what in the world Policy Council is,  call (406) 293-4502 or send them a message on Facebook @plummerpreschoolcenter

Coach Mathew Roberts said, “Last games of the year and they were total domination!” The 5th grade Libby Loggers won 16-0 and the 6th grade team won 50-6. The last games were held in Eureka against the Lions on Saturday, Oct. 2.  “The season was okay, we had to shuffle kids around a lot because of kids getting quarantined,” said Roberts. Even with the struggles of COVID-19 the team had a successful season and most are already looking forward to next season.