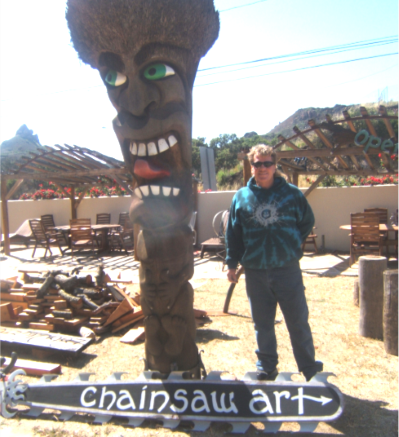 Rio Dejarnette stands  next to one of his own carvings named, “tongue twister.” Photo by Moira Blazi , The Montanian.

According to chainsaw carver, Rio Dejarnette, there are really only about 2,500 ace carvers in the whole world and it is truly a tribe of colleagues and friends. “A lot of us know each other,” he told The Montanian.

A Kootenai Country Montana chainsaw competition organizer, Steve Backus agrees. “These competitions are huge networking opportunities, for an artistic discipline that is just coming into its own. I like to compare it to the professional rodeo association, “ said Backus.  It was, “a somewhat disorganized group of regional participants 30 or 40 years ago, and has now become a large national organization. When we started, there was no e-mail and Facebook to help with networking.”.

Now, the chainsaw tribe is an international organization, poised to create bigger and more inspiring events in the coming years.

“Chainsaw carving is still in its infancy,” he said.

Fortunately, Backus  met Libby businessman, Paul Bunn, and local carver,  Ron Adamson, several years ago, and together, they hatched the crazy idea of bringing a world-class competition to a small town in Northwestern Montana.

“There had never been a chainsaw competition in western Montana before Libby,” Backus told the  Montanian. Libby is, of course, a perfect place to hold such an event, and the first competition, held in 2017 was considered a huge success.

Although Rio Dejarnette was not a judge the first year, he came to Libby to  help Bunn, Adamson, Backus and others pull together this challenging project. For the  second event, he was asked to return as one of the five judges, joining local sculptor, Todd Berget, and carvers, Jen Watson, Annette Backus, and Nyle Thomas-carver.

“I wanted to help Steve (Backus) show the world what Libby is really like,” Dejarnette told the Montanian. ”That this beautiful town is not a death trap.”

“To be a judge, you don’t have to be the best, but you do have to really know what you are looking at,” said Backus, “and from the very beginning I wanted Rio involved.”

Backus and Dejarnette met in 2002 at a carving competition in West Port, Washington, where Dejarnette was a judge. “He returned in 2004 as a competitor, and carved a giant bong,” Backus recalled with a laugh. “He set up a  welcoming place, was a very gracious host, and became part of the tribe.”

Traveling up from a thriving studio and gallery in the Kanan canyon of southern California, Dejarnette, who sports a blond mohawk and gracious, engaging spirit, came and fell in love with Libby. He  returned the next year as a professional judge and made lots of friends.

He returned to his home and studio last September after the competition, and two months later, the Woolsey fire swept through and burned everything to the ground.