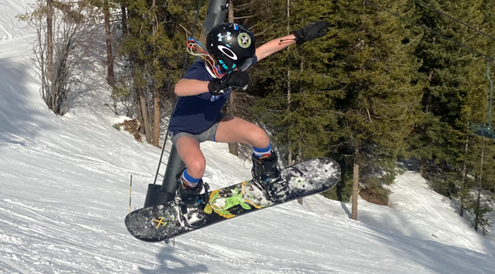 On Sunday, March 6 around 8:30 a.m., trucks and cars started rolling into the Turner ski area parking lot after making it past the treacherous roads. As people slipped their way over to the lodge something seemed a little different, for this wasn’t any old morning at the mountain. The first sign may have been the cardboard boxes unloaded instead of skis from vehicle trunks, or the plethora of neon tutus accompanying snow pants, but as the crowds gathered and banners flapped in the breeze, it became apparent that another Crazy Days was getting into full swing. 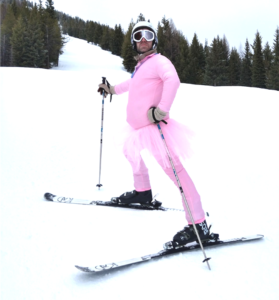 This annual event is a time for people of all ages to have a blast skiing and snowboarding, as well as compete in various races, raffles, and ruckus.

The first event was the jeep-road race, which had three heats and involved athletes pelting themselves down the gradual trail as fast as they could. Another event was the steady-hands race. Kids held mini cups with juice, teenagers were given kool-aid, and adults were poured a delicious Cabinet Mountain Brewing draft.

The racers rode the lift, met at the top, and the first person to make it to the bottom with both speed and relatively full cups won. Additionally, there were golden tickets hidden in trees that could be traded for candy bars, a water balloon launcher run by Michelle Geisy, and prizes galore.

The highlight may have been the cardboard box race, held on the bottom half of the main run. Racers gathered at the start line, crouching, kneeling, and peaking out of cubes of all sizes. There were some with racing stripes, one with a roof, and even a box that looked like a motor boat. A group of trusty spectators stood at the bottom of the run, ready to catch those racers with just a bit too much speed.

Occurring annually for some time, locals such as Dakota Bassett, a crucial organizer for this year’s event and lift operator at Turner, remembers Crazy Days from when he was a kid as being a great community event and a fun time.

Many helping hands aided in the success of the day, including Ryan Newby, a Turner ski patroller and event organizer who said that his favorite part was “seeing the kids’ faces, people having fun, and knowing that they’ll have something to remember and care about in the future.”

Runner Brings in Funds for CARD 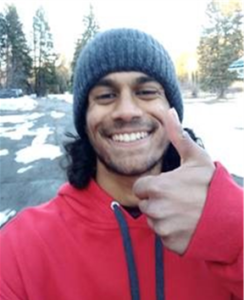 Sujay Singh is a young man who likes a challenge. He has been in the Libby area for about 5 months working on chronic wasting disease research and management in wildlife. According to Singh, “I absolutely love living in this town, and have had the opportunity to meet and work with some incredible folks. I have also had the opportunity to learn about certain aspects of Libby’s history regarding vermiculite mining and the negative impacts of asbestos exposure. I figured that the least I could do to give back to members of the Libby community would be to pick CARD as an organization to receive donations.” 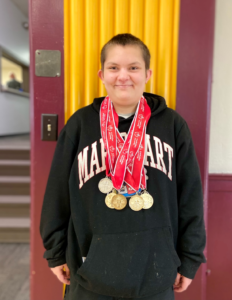 Sierra Gardner may be a somewhat shy seventeen-year-old, but she certainly excels at bowling. The Troy High School junior recently won a gold medal in bowling at the winter Special Olympics event in Big Fork. Due to the pandemic, participants for 2021 bowled weekly at home and then sent their scores in to be compiled. Sierra won last year as well, but was excited to be able to participate in the live 2022 competition. She has been bowling casually for several years but began participating in Special Olympics for the sport just last year. She also competes in the state youth league. Apparently Sierra’s favorite things about bowling are “getting strikes” and eating pizza afterwards. She also enjoys having friends to bowl with and would like to see more involvement in the program.

Sierra’s sports prowess is not just limited to bowling and according to her mother, she is willing to try anything. She plays varsity tennis for the Troy High School, both singles and doubles, and this, Sierra adds, is her favorite sport. Snowboarding is another activity at which Sierra excels and she has medaled in it at previous Special Olympics events. In fact, Sierra was the driving force behind getting the Troy School District signed up to participate in Special Olympics. She and her family moved back to Troy in 2020 and Sierra very much wanted to continue participating in the sporting events as she had since 2019. She brought the request to one of her teachers who, with support from Sierra’s mother, Tawnya Keto, began the process to bring this opportunity to Troy.

Sierra’s special education teacher, Kyla Grose, explains that bowling is a unified sport for Special Olympics. This means that participants must bowl with a partner that is not involved in special education. Sierra’s usual partner is Anna Pallister, whose parents both teach at Troy High School. The idea behind that requirement is to foster inclusion and build relationships among students. According to Grose, who works closely with the program, there are currently 4 high school participants in bowling with another 4 from the elementary school. She sees it as a fun way for special education students to interact with other kids outside of school and is incredibly proud to see the accomplishments of all the students who participate. The nice thing, Grose adds, is that students can stay involved with Special Olympics as adults. The sports available differ seasonally, and the goal is to eventually be able to expand, adding more sports opportunities for students in Troy.

Congratulations to Sierra on her accomplishments. It is great to see local students reaping the benefits available through Special Olympics.