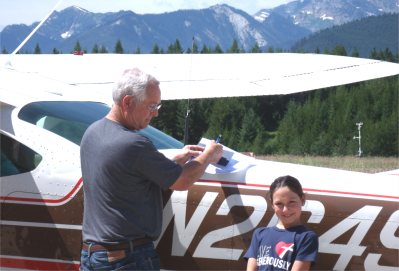 Pilot Dan Skalsky signs a flight certificate for Cailin Morgan who said, “I got to talk on the radio and we saw the fire lookout and Libby Dam, roads, cars, and no people.” Cailin’s dad is a Wildlife Biologist at the Libby Ranger Station. Photo by Brian Baxter, The Montanian

There are old pilots and bold pilots, but there are no old, bold pilots. This old aviation aphorism refers to the ultimate importance of checking the weather and atmospheric conditions before one takes off, hopefully, into the friendly skies.

Anyone who has ever flown in a commercial passenger jet knows the extremely uncomfortable feeling that even moderate in flight turbulence can trigger.

Pilots are trained to carefully begin with pre-flight planning. This is a must whether flying a high tech Air Force fighter jet, a forest fire fighting retardant dropping bomber, a commercial jet, or a small private fixed wing Cessna 170.

When planning a trip, the first major pre-flight task involves compiling information about current and forecast conditions along the intended route, assessing the situation, and developing a clear mental picture of what to expect during the flight. Especially when you are carrying precious cargo such as the youth of our communities.

A pilot’s aviation weather analysis is thorough and intense. Under the cloud ceiling and visibility category, pilots must check the amount of air space between reported and forecast cloud ceilings and terrain along the route of flight. Ground clearance is also important, especially if the  flight will be over mountainous terrain or near any large bodies of water where weather can change rapidly. Visibility expected for each phase of the flight including departure, enroute, and destination are considered. Sufficiency of light, areas of decreasing temperatures, and dew point spread are also considered.

As far as aircraft performance, pilots must consider  temperature, altitude, density altitude, and aircraft loading. They must consider aircraft performance in relation to take off distance, distance to climb, cruise performance, and landing distance. Regarding turbulence, aviators will make sure to check that wind conditions at departure and destination airports are within the gust and crosswind capabilities of both the pilot and the aircraft. They must also check the maneuvering speed (Va) for the aircraft at the expected weight. (www.faasafety.gov)

On the morning of the Young Eagles Rally, the EAA Chapter 102 and all pilots had most certainly properly prepared and knew the weather forecast. In their cautious approach, they double checked conditions for one plane that was planning to take off in Plains, Mont., and head 78 miles northwest to the Libby Airport. When they saw a forecast of heavy thunderstorms over Plains, they canceled that flight but others remained on to give rides as planned.

The crew of pilots Captain John McCrorie, and Captain Dan Skalsky, along with air to ground operations chiefs, Paul Parker, and Scott Lennard, and assistants Donna Parker, and Mary Skalsky were ready at the Libby airport. They  knew the skies were clear for a great day of flying over the Libby area.

The only thing they were unsure of was how many folks might show up; but show up they did. Parents began trickling in at 8 a.m., and kept coming all day long. During their busy day, the team accommodated approximately 82 kids. So many showed, that an additional day is being scheduled. All of the kids had big smiles on their faces, and so did the crew. Participating kids received a certificate after  flying and the crew put in extra hours to make it a great day for our area kids.

Lennard told The Montanian, “I’m glad the event turned out so well. It was a beautiful day and fun for all. Many kids had their first taste of flight. Many thanks to the crew that came from the Kalispell Chapter of the Aircraft Association. We tip our hats to them.”