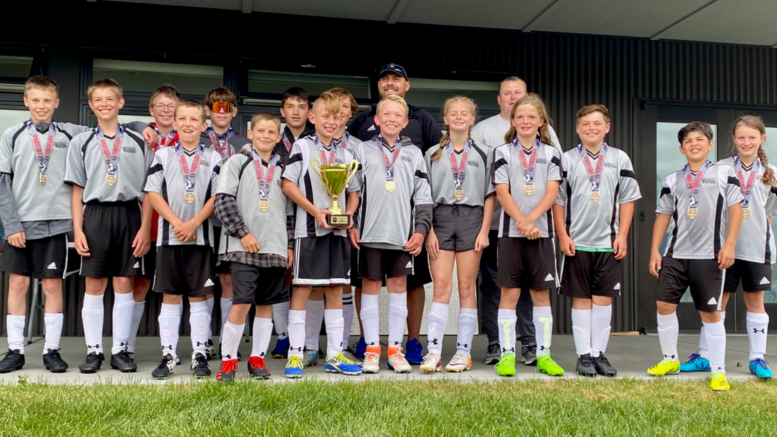 The Lincoln County Kootenai Rapids Soccer Team traveled
to Livingston, Montana this past weekend with an undefeated

are joined by 2021 Championship Team players

Right below: Coach Dodson and Coach Watson collectively grasp the State Trophy in celebration of a remarkable season with their team. 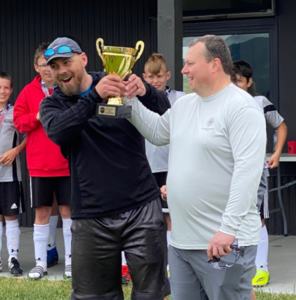 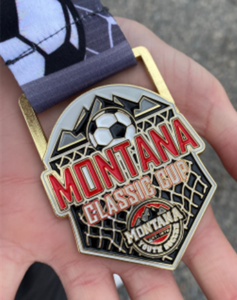 The final signature has been penned on the
long-awaited sale of property off the back nine holes of Cabinet View Golf Club (CVGC)  in Libby is now
complete.

As this past week came to a close, it was expected that the City of Libby would be finding $1.541 million dollars deposited into their coffers. Payment in full of a loan received from the city in 2001 as part of an $8 million economic boost from the federal government.

CVGC’s non-profit, volunteer Board of Directors has remained focused on selling the land for the past 15 years, at times reaching into their own pockets to keep the golf course afloat.

With this final sale – $1,912,5000 – the CVGC board is thrilled to pay the city back in full and
receive a $541,000 grant which will be matched through fundraising and bring the local course
opportunity to build a much-needed new clubhouse.

CVGC provides one of the larger tourist
attractions in the county. As such, this drives
dollars into the local economy as patrons seek out businesses for food, lodging and entertainment.

“The potential revenue stream now on the table is substantial and will benefit the City of Libby in many ways,” said Mercer.

The planned subdivision of 70-80 lots on the land sold will also bring profit and benefit for the city in the form of initial construction and jobs, potential improvements to local infrastructure, and increased revenue from water and sewer fees and property taxes. 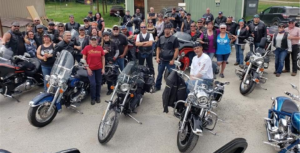 “In 2014, we had some friends that wanted to take Colby and I out of town to clear our heads on the first anniversary of Kayla’s passing,” shared Paula Paasch, whose daughter had passed away in the late Spring of 2013. “We were gone for a few days and during that ride it was mentioned that this was ‘Kayla’s Ride.’ So that is how this ride was actually started.”

Kayla left behind a two and a half year-old son at the time of her death, so friends chose to collect monies which would go back into an account set up on his behalf.

Over the years, the ride has grown and now welcomes friends, family, and all those whom have been affected by the loss of a child.

“This was our largest ride to date,” Paula stated. “There were two people who tied for winning the annual poker hand, but they donated those
monies back to the ride!”

Proceeds from each ride are now disbursed into the Troy community, where Kayla’s family
resides, and utilized to help a child in need.

Be that for Christmas, school supplies, medical bills, or whatever that child might need in their lives.

“This year we are bringing back some old favorites to our fun-filled tournament and adding some new exciting twists for another round of hilarious golf, all for a good cause,” announced Allye Anderson, Executive Director of the Foundation.  “As in recent years, most holes have its own prize, so more of our participants have a chance to walk away a winner!  Some of these contests are traditional, such as closest to the pin, and longest putt.  Other holes have games that are much less traditional, but sure to be tons of fun!”

Anderson also mentioned that there are some changes to this year’s event.  “Our tournament is known for fun on the course and twists on the classic game of golf, and we are bringing all of that back to you again this year.  However, all prizes will be CASH prizes this year.  This includes the prizes for our hole contests, as well as cash prizes for the first 5 place teams.”

Proceeds from this year’s Playing for Fundsies will benefit Cabinet Peaks Medical Center.  Registration is $60 per golfer and includes lunch and 18 holes of golf.  Winners will be announced at the club house at the conclusion of play.

“You don’t have to be an amazing golfer, to join us, or to win prizes at Fundsies.  We’re keyed up for the event, and are looking for more golfers to join us,” concluded Anderson.

For more information, to make a contribution, or to register a team, contact Allye Anderson at 283-7140 or ahow1@cabinetpeaks.org.

With Troy’s Old Fashioned Fourth of July celebration just ten days away, I wanted to take some time and share some important reminders to ensure a safe and happy Independence Day for everyone.

The following is a brief breakdown on what to
expect in our community on Sunday, July 4.

There will be an all-church outdoor service that morning, starting at 9:00 a.m.  All are invited to the service which will be held at the green bleachers
located behind Morrison Elementary School.

Traffic modifications will begin with the closure of St. Regis Haul road beginning at 10:00 a.m. for
parade staging.

Hwy 2 will then be closed as the parade begins at 11:00 a.m.  A detour will again be staged for thru-traffic only.

As activity moves across the railroad tracks and towards Roosevelt Park for duration of the day and evening, there will be one-way traffic pattern as in years past.