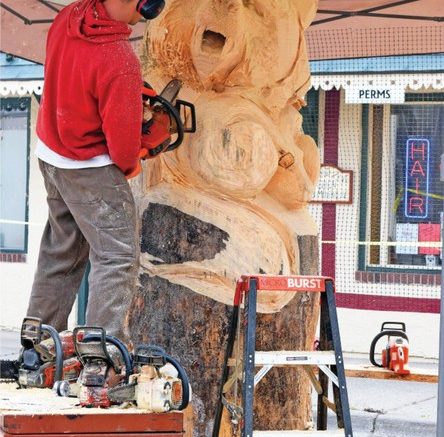 Twenty of the world’s finest chainsaw artists will descend upon Libby next month for the Second Annual Kootenai Country Montana Chainsaw Carving Championship. The championship will be held on Mineral Avenue in downtown Libby from Sept. 21 until Sept. 23, 2018.

“We had a great time, and a fantastic community response, last year,” said organizer Paul Bunn of Libby’s Venture Inn. “We think it’s a great way to show off the wonderful area in which we live while highlighting the rich heritage of timber and forestry.”

For this year, the competition has been expanded from 15 to 20 entrants, with artists hailing from five different continents: North America, South America, Europe, Asia, and Africa. Last year’s champion, Steven Higgins (Missouri), is returning to defend his title, along with second and third place finishers Mark Colp (California) and Joe Dussia (Pennsylvania), respectively.

While certainly not new to carving, 12 new contestants will take the field in Libby this year. Two additional artists hailing from Pennsylvania, Dennis Beach and Dawna Ceriana, will be competing, along with Kentucky’s Abby Peterson, Idaho’s John Schulz, and Susan Miller of Oregon.

Five of the 2018 competitors come from Europe, although two of them now call America home. Tomas Vrba comes from Slovakia, but now lives and works in Bellingham, Wash. Alex Pricob, a native of Moldova, is traveling to Libby from Renton, Wash. John Hayes is coming from Waterford, Ireland, and Garry Shand is traveling from Drummuir, Scotland. The artist traveling the greatest distance to compete this year is Raimondas Uzdravis, “Raimis the Logger,” from Kaunus, Lithuania.

Representing the African continent is Zimbabwe native Bongo Love. Love currently lives and works in Boulder, Colo. Rounding out the slate of international competitors is Adrian Bois, from Argentina.

“We have grown our international field this year, which is a testament to the popularity of this unique art form,” Bunn said. “I think it’s also a credit to the quality of the event we put on last year, that so many artists wanted to come back and compete again. The word is getting out, Libby is the place to be!”

In addition to expanding the field, organizers this year have added food and beverage service at the event site. The food court area, which will feature several local food trucks as well as three of the professional barbecue caterers who competed in this year’s Bigfoot Barbecue, will be on Second Street, between Mineral and Montana avenues. The food court will also include a beer garden, courtesy of Libby’s VFW Post 1548.

Like last year, the event will include one masterpiece carving from each artist. Each will start with one log, roughly eight feet tall and three feet in diameter. The artists are free to cut off pieces and reattach them as they see fit, but the masterpieces are limited to art created from the original log. Each artist will also complete three “quick-carve” pieces. These are pieces carved from smaller pieces of wood during the 90-minute quick-carve breaks scheduled during each morning of the competition.

“We hope everyone is looking forward to this as much as we are,” Bunn said. “It takes an entire community to pull off an event of this magnitude and we are very grateful to the people of Libby, the City Council, and the business community for their support. We couldn’t do it without them.”