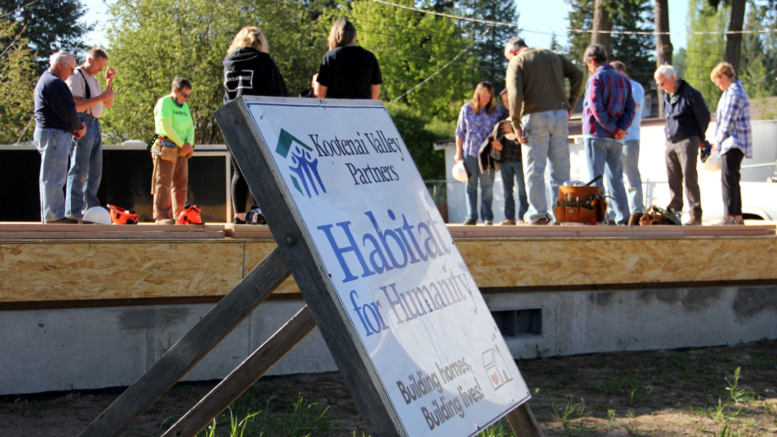 Volunteers with the Kootenai Valley Partners Habitat for
Humanity organization gathered on Klatawah Street in Libby on Monday morning, May 17,  for a “Blessing of the Home”  currently under construction for Corey Willis and her family. 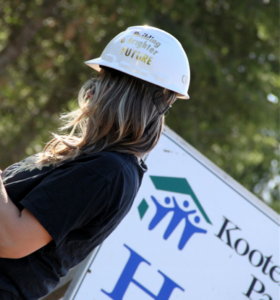 Building a Brighter Future,” reads the hard hat given to Corey Willis onsite at the Habitat for Humanity home on May 17.

The foundation had been laid and the floor installed by Willis
and several Habitat volunteers in the Fall of 2020. The first wall of the home was now expected to rise by Monday afternoon.

Construction at the Woodway Park site is expected to

transpire five days per week all summer long, according to

“Habitat for Humanity is still operating under strict Covid-19 guidelines, so at this time we are capping the sets of helping hands at 10 people per job,” said Pemberton. “But we are
pre-registering volunteers at this time. So people can call in and get on the list to help out!” Volunteers need not have extensive
experience in construction, the Habitat team is will and ready to teach you. Those wising to volunteer may do so by visiting
Kootenai Valley Partners for Humanity 2021 Build on Facebook, or text a request for more information to 508-951-3145. 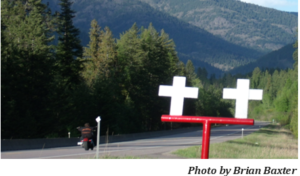 Visitors to our vast open road Treasure State
often notice and ask about the white crosses with red post
markers that dot the major highways and rural roads across our great state of Montana.

At 147,040 square miles, an expanse almost 400 x 400 miles in area, Montana is the fourth largest state. Our mountains, prairies, wetlands, forests, lake basins, and river valleys are all interconnected by a complex series of highways, rural roads, gravel routes, and back-country dirt roads.

As we approach another Memorial Day weekend, a holiday known for high travel miles, it would be wise of all to remember that along these road systems are a multitude of very dangerous spots.

When asked about these markers, native and long-time residents usually explain that these crosses serve several purposes. They are erected to pinpoint sites of fatal crashes. By doing so, these poignant reminders then warn travelers of extremely dangerous locations and stretches of road.

In addition, the crosses honor people who lost their lives in vehicular accidents and give their loved ones a physical location to reflect, remember and pause to briefly grieve.

Historically, many credit an American Legion
member, Floyd Eaheart, for coming up with the idea to erect the highway markers. The safety conscious and
compassionate Missoula Legionnaire installed six white crosses at the site of a Labor Day accident that claimed six victims in 1953.

2021 marks 68 years of placing markers alongside Montana roadways. The White Cross Highway Fatality Marker Program is sponsored by over 140 American
Legion posts in our beautiful state. It is estimated that there are approximately 2,700 markers scattered across Montana, with a yearly average of just over 120 accident fatalities per year.

Joe Johnston, the Finance Officer for our local Austin Reedy American Legion Post # 97, told The Montanian, “Every weekend, on the Sunday before the Memorial Day weekend, member volunteers perform maintenance and painting on the crosses. In southern Lincoln County, the recently merged Libby and Troy Post care for the markers, and northern Lincoln County is covered by Eureka’s Post #74.”

It is estimated that there are several hundred crosses dotting Lincoln County. Some also give credit to the
Montana Highway Patrol for fully implementing the white cross program in 1958 to mark those dangerous locations on our roadways and act as a reminder to drive safely. MHP provides notice to the Austin Reedy Post of Libby each year on where it would be a good idea to install
another white cross marker.

It is right and just that we should give thanks to
all the volunteers that assist with the installation, brush clearing to enhance distance visuals, and maintenance and painting of these important markers. “We would like to give some credit also to Post Commander Larry King,
who supervises the construction or reconstruction of the crosses and pays for materials out of his own pocket,” said Johnson.
As any working person who has been trying to get their own painting done knows, material costs have soared recently. If you would like to volunteer to help with the White Cross Highway Fatality Marker Program or wish to donate for materials, please call Joe Johnston at 291-3630.

Libby School District 4 is among 151 nationwide communities selected to receive a total of 154 grant awards totaling $66.5 million in EPA Brownfields funding through the agency’s Multipurpose,
Assessment, and Cleanup Grant programs.

This funding will support underserved and
economically disadvantaged communities across the country in assessing and cleaning up contaminated and abandoned industrial and commercial properties.

Approximately 50 percent of selected recipients will be receiving EPA Brownfields Grant funding for the first time and more than 85 percent are located in or serving small communities.

“EPA is pleased to support Libby School District 4 in their efforts to clean up and redevelop the historic Asa Wood Elementary School,” said Mark A. Smith, EPA Region 8 director of the Land, Chemicals, and Redevelopment Division. “We look forward to seeing the building revitalized as an assisted living facility that will serve seniors in Libby and Lincoln County for years to come.”

“This is a big deal and it’s a true win-win for the school district, the city, and the county,” said Mark Peck, Libby Asbestos Superfund Oversight Committee and Lincoln County Commissioner. “It will provide
opportunities for investment and
economic development.”

EPA Brownfields funds will allow the School
District to clean up asbestos, lead-based paint, and mercury at the former school building, which operated from 1953 to 2011, to facilitate its redevelopment as an assisted living facility for senior citizens.

The list of the fiscal year 2021 applicants selected for funding is available here:
www.epa.gov/brownfields/applicants-selected-for
fy-2021-brownfields-multipurpose-assessment-and-cleanup-grants

EPA anticipates that it will award the grants once all legal and administrative requirements are satisfied by the selected recipients.

Since its inception in 1995, EPA’s Brownfields
Program has provided nearly $1.76 billion in grants
to assess and clean up contaminated properties and return them to productive reuse. This has led to significant benefits for communities across the country.

Based on grant recipient reporting, recipients
leveraged on average $20.13 for each EPA Brownfields dollar and 10.3 jobs per $100,000 of EPA Brownfield Grant funds expended on assessment, cleanup, and revolving loan fund cooperative
agreements.

In addition, an academic peer-reviewed study has found that residential properties near brownfield sites increased in value by 5% to 15.2% as a result of cleanup activities.

Finally, analyzing data near 48 brownfields, EPA found an estimated $29 million to $97 million in
additional tax revenue for local governments in a
single year after cleanup—2 to 7 times more than the $12.4 million EPA contributed to the cleanup of those brownfield sites.

For more on the Brownfields Grants:
www.epa.gov/brownfields/