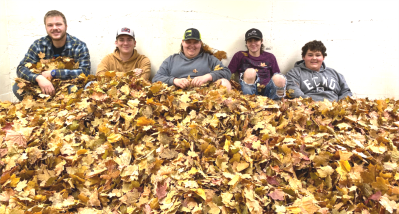 Zachary Willis, Jack Johnson, Gunner Hoffman, Carson Kateley, and Tytus Meister take a break from working on the haunted house to pose for a photo.  Photo by Tracy McNew, The Montanian

This Thursday, keep your eyes open for witches, clowns, superheroes, unicorns and skeletons roaming the streets. Halloween is here and so are local festivities for children and adults alike.

This year, the Rotary Club of Kootenai Valley and Libby Public Schools will again host a trunk or-treat event in the parking lot of the school’s central administration building which also houses the alternative school.

Alternative school students and their teacher, Dean Herried, have taken on a project to design and run a haunted house for the event. The haunted house will be held in the school’s basement. According to students working on the project, they’ve been planning and preparing for the haunted house since the beginning of October. As of last Friday, there was still a lot of work to be done, they said, but they have been enjoying the challenge.

The alternative school is able to individualize their students’ curriculums so that they can be more engaged in projects like this, one student told The Montanian. Another added that, believe it or not, there is a lot of math involved in planning and making the haunted house’s components. Herried told The Montanian that the haunted house project is a fun and unique way to learn and get students involved in their community.

Families are invited to dress up and come out to Libby’s central school on Halloween night, Thursday, Oct. 31 to enjoy free food, games, prizes, trunk or treating, and the much-anticipated haunted house. Trunk or treating will begin at 5 and last until 7 p.m., and the haunted house will be open from 6 until 7:30 p.m. with all ages welcome during the first half hour. From 6:30 until 7:30, the haunted house will only be open to those who are ten years old or older because it may be too intense or scary for younger children.

Libby’s community has really come together to once again make this event possible. Residents, businesses, and public servants are volunteering to set up trunk or treat stations, students will be working at the games and hosting the haunted house, and many others in the community have donated candy, food, prizes, lights for the parking lot, and more for the event.

Residents who want to volunteer are welcome to participate by setting up a trunk or treat station in the school’s parking lot for the event. Check-in and setup will be from 4 until 5 p.m.

“We’re really thankful for all of the public support,” said Gary Huntsberger of the Rotary Club. “This is a great community event that attracts over 600 kids every year. It is a fun and safe Halloween activity that ends early enough not to interfere too much with school the next day.”

In addition to Libby’s trunk or treat event, there will also be a trick or treat store to store event in downtown Libby hosted by the Libby Area Business Association. From 4 until 6 p.m., kids will be welcome to trick or treat at businesses displaying an orange pumpkin in one of their windows or on their door.

The Libby Christian Church, located at 100 Kootenai River Road will host a Fall Party event from 5 until 6:30 p.m.  followed by Thursday Night Pursuits for kids from 7 until 8 p.m. They will have candy, prizes, and even a chili dinner.

Libby Care Center (LCC), located at 308 East 3rd Street in Libby will host a Harvest Party from 2:30 until 4:30 with karaoke, games, prizes, food and fun. Everyone is welcome to attend, and a costume contest will be held for kids up to the age of five. LCC residents will judge for first and second place costume contest winners at 4 p.m.

The Evergreen Motel will host a Halloween party and costume contest too. Kids eight and older will be welcome from 4 until 8 p.m., and afterwards, the event will be open to adults only.

In Troy, another trunk or treat event will be held at the Troy Activity Center parking lot from 4:30 until 6 p.m.

Halloween parties will also be held at Happy’s Inn, Yaak River Tavern, the Pastime Bar and other local venues. Have fun this Halloween, and remember to stay sober driving and alert for costumed kids on the streets and sidewalks.

“Change is the only constant in life.”

This quote is credited to Greek philosopher, Heraclitus, around 505 B.C., and it is directly relevant to the state of affairs in and around Libby, Montana recently.

The changes are tangible in the new businesses starting up, fresh initiatives to add or improve outdoor recreational and educational opportunities, and a perceived pulse of enthusiasm in residents and visitors alike.

This metamorphosis has been occurring before and since the Kootenai Peoples prayed in their spiritual place of worship at the Kootenai Falls. This beautiful area of northwest Montana has seen parties of David Thompson’s fur traders and explorers set up numerous trading posts along the Kootenai River. Early miners were a hearty group that panned area creeks flowing from the Cabinet Mountains, so named by previous French fur trappers who were here before Thompson and the miners. With the discovery of the Snowshoe Load up Leigh Creek, and the establishment of the first major sawmill around 1890, settlers flowed in, encouraged further by the rumor of the Great Northern Railroad being built here along the route to the coast. Wagon roads were built, and ferries to cross the Kootenai. The settlement was named Libby, after the daughter of a miner named Elizabeth. Forest fires in 1906, destroyed many buildings, and again ravaged the area in 1910. But by 1912, the citizens, composed largely of miners, forestry folks, saw mill workers, railroad workers, and business people, established Lincoln County.

The Libby area was surveyed and a street system was laid out. Around 1914, some of the original brick, mortar, and stone buildings were built, including the historic Libby Hotel, the first bank (now the American Legion), and the Libby Mercantile building.

In 1920, at the beginning of an era labeled “The Roaring Twenties,” there appeared an ad describing the Kootenai Mercantile Company as Libby’s big department store at 316 California Avenue. It further elaborated that the Merc, as it was called, had four departments in one large brick building. In all, the departments included dry goods, ladies apparel, men’s furnishings, hardware, and groceries.

The advertisement further boasted that all this was under one management, with facilities for quantity buying and efficient service, as well as a capitol figure estimated at $100,000. This ad listed company officers as Ed Lukens, President; F.M. Plummer, Business Manager; and C.W. Millett, Secretary. The slogan at the bottom read, “it’s a pleasure to buy at the K.M.” (Maureen and Mike Mansfield Library at the University of Montana, in  Missoula)

During World War I, newspapers were full of explicit photos of dead and wounded soldiers. Gangsters had their mugshots plastered every few pages. But with the Armistice of war in November  1918, the people were more than ready for changes to come. It was a time of celebration with bars and dance halls hosting upbeat music and strong alcoholic beverages for their clientele.

In 1920 though, that also changed. The Prohibition Act of 1920 banned  the production, importation, transportation, and sale of alcoholic beverages. Public sentiment was mixed. Some establishments, to continue serving alcohol, went underground figuratively and literally. They were called speakeasies. Customers frequenting the hidden taverns needed to speak easy about their existence, or they could be raided  and shut down.

Long time residents of Libby still talk in a hush tone about the supposed speakeasies in our town. Legend has it that the Libby Hotel, once revered and advertised as the finest hotel from Spokane to the Dakotas, the Libby Mercantile, and the first bank established in Libby located at 319 California Ave., were all connected by a series of five foot high tunnels reinforced with supports to permit travel between the three businesses. A five foot high bricked in area in the lower basement on the south facing wall of the Libby Hotel  towards the north wall of the Merc can still be seen today.

Prohibition was repealed in 1933. In the 1980’s, a basement bar called the Loading Chute was opened in the lower level of the Merc, and it hosted musicians like Jorma Kaukonen, a rock guitarist who performed with Jefferson Airplane and Hot Tuna in those wild sixties, seventies, and eighties. Jorma’s band rocked the Loading Chute, and many good bands played there during the eighties too. That establishment closed in 1990, and the Merc building sat for many years with only sporadic activity.

Vincent Backen, a fifth generation Libby native has ideas for a rebirth of the old mercantile building. As he told The Montanian, “Someone needed to purchase the building as it was sitting vacant and a plight on Libby.” Backen appreciates the history of the building and the abundant space available with 100 feet of frontage on California Ave. Backen also owns Libby Hostel, and he recently refurbished the building on Mineral Ave. that is now Libby Gym.

Among Backen’s many ideas are leasing out spaces in the near future to selected entrepreneurs. Along with his son, Drew Magofna Backen, they are planning to open an Island Fusion Sushi Bar in the building too. There could also be a woman’s lingerie shop. Backen remains open to new business ideas, leasing space, or joint ventures.

“Many people are focusing on tourism, and anticipating our new economy to be tourism based. For the town to benefit, Libby folks may want to lean into tourism and a more progressive way of thinking,” said Backen. If you are interested in putting a new business in the prime location of the Kootenai Mercantile building, especially one that may positively impact the tourism economy, you are encouraged to call Vincent Backen at 406-200-3193, or email him at backen.vincent@gmail.com. You may also find him at Libby Gym, located at 420 Mineral Ave. in Libby or at the Libby Hostel Base Camp located at 427 Thomas Street in Libby. 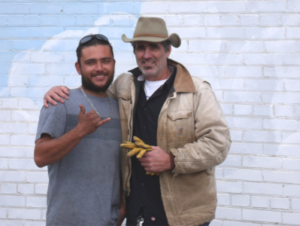 Drew and Vince Backen, owners of the Kootenai Mercantile building. Photo by Brian Baxter, The Montanian.