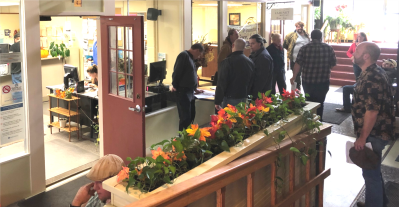 Libby Job Service opened its doors to over 100 locals for the Isotex hiring event. Photo by Tracy McNew, The Montanian.

The five-acre site has plenty of room for expansion said, Jason Cross one of the four Isotex Health representatives conducting interviews. Cross expects future expansion of the plant that will be used for   large-scale processing of hemp. A formal press release about sale has not gone out, but Kootenai River Develop Council, Inc posted this on their Facebook page on  Sept. 27. “Expectations mount as a company begins transport planning for industrial hemp productions at their recently acquired facility in Libby, Montana… its time.”

Only a week later, Isotex Health held a hiring event and interviewed 116 people between 12 noon and 5 p.m. According to Cross, the company plans to hire at least 50 employees right away and they will need 80 employees in the next few months. Ultimately, he said they plan to employ 150. The jobs are expected to pay well, at about $20 per hour for hemp extraction technicians. They were also interviewing for a human resources manager at  $50 to $60,000 per year, and eventually they plan to provide benefits. They also intend to give back to the community as much as possible, Cross said, by making improvements such as building a community park near the kids fishing pond, fixing the fencing around the Kootenai Business Park and producing money-saving pellets from hemp byproducts that can be burned in the school’s boilers.

Isotex Health is a start up from Texas, but Cross and his family bought a ranch in Eureka, Mont. because they love the area. They considered Eureka’s rodeo arena before deciding to purchase in Libby, and they’ve  been working with Tina Oliphant and Brett McCully at the Port Authority since the Eureka facility fell through. “Tina and Brett are awesome to work with,” Cross said. The company also purchased a facility in Texas.

They will manufacture CBD oil from hemp plants,  versus marijuana plants.  Hemp is a variety of cannabis specially grown for their tall, sturdy stalks that have less than 0.3 percent THC, the chemical responsible for most of cannabis’s psychological effects and “high” feeling. CBD is not a psychoactive compound and it has many medical benefits. It can be used to help with conditions such as pain, inflammation, anxiety, migraines and seizures.  Although the company is a start up, Cross and the others are very confidant in its future success. They’ve put together a solid set of investors, they’ve got large contracts in place, and they just set up the largest hemp purchase ever in the United States.

Ted Werner, a Lincoln County Port Authority board member told The Montanian that he agrees. “I think it’s going to be as good as it sounds. This is a real renaissance for Libby,” Werner said.

Isotex Health is about to harvest 13,500 acres of hemp planted in Choteau, Scobey and Poplar, Mont. Next year, he said, 50,00 acres will be planted and it will be closer to Libby.

Cross shared that as soon as he started using CBD, his sciatic nerve pain felt better. “We want to make people’s lives better.” he said. “It’s a way to help people feel like I do.” 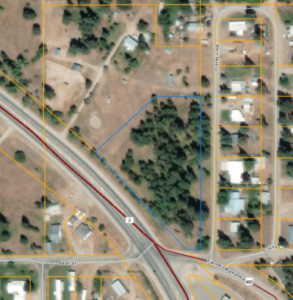 On Wednesday, Sept. 18, a group of community members voiced their opinions and concerns to Lincoln County Commissioners during the public comment period at their weekly meeting. The source of the group’s angst was related to rumors of plans to build a casino, liquor store, and laundromat on the 2.63-acre lot at the corner of Frazey Loop, Farm to Market Road and Highway 2 on the south side of Libby near Bears Country Store. The entrance to the businesses would be on Frazey Loop, across from a residential neighborhood.

Commissioners heard residents’ concerns, and Mark Peck suggested that the group request to formally be put on the agenda for a future meeting.

On Wednesday, Oct. 2 the group had their opportunity to formally present their concerns to the commissioners. The group primarily consisted of homeowners near the Frazey Loop residential area. Approximately 15 people filled the Commissioners’ chambers for the meeting, and the concerned citizens appointed a spokesperson, Harold VanOverbeck, to discuss the matter on their behalf.

VanOverbeck explained that the group didn’t have a lot of facts, they  were mostly rumors, but they were concerned about the new development’s possible effects on their residential water supply due to increased usage from a possible laundry mat. They also expressed concerns about possible increased crime in the area, the location of their school bus stop, effect on their property taxes and property values, increased traffic, light, and noise pollution. One person was also concerned about a group of deer who live on the land that would be displaced.

Peck said, “there has been no official filing for the proposed business.”

Fortunately, the owner of the property in question who is also the potential developer, Jim Beasley, attended the meeting to help answer some of their questions.

Beasley owns the bowling alley that was recently closed and converted to storage units. He would likely be using that liquor license for the new business venture. He made sure to set the record straight that his father, Bob Beasley, would not be involved. He also said, “If I could have my cake and eat it too, I would be designing a casino, liquor store, laundromat, and then have a minor sub-division… That would be my vision. All of this has to be approved by DEQ.”

He also told the group that he has had the area surveyed, no water wells would be affected by the laundromat, and that most of the trees would be left alone in the subdivision area. He also expressed that he had talked to people who live south of town, and they were very supportive of a new laundromat. “There are other laundromats in town, but there are currently none in this area. Would you rather go across the street or drive downtown?” he asked.

Beasley is hopeful that formal paperwork will be submitted on the project in approximately a month, and once approved, he said that he would like to break ground four to six weeks later.

Dodson was appointed to the position of Undersheriff on Sept. 19 replacing Brian Griffeth who moved away. Dodson has worked at the Sheriff’s Office for ten years and most recently spent three years as a narcotics detective.

Although Dodson is not originally from Libby, he has made it his home. His wife is from the area and he has grown to love the community he serves and appreciates the “great group of people” that he gets to work with.

Dodson volunteers as a soccer coach, as a member of Unite for Youth working to combat underage alcohol, tobacco and prescription drug use, and he leads the annual Shop with a Cop program during the Christmas season helping the community while building partnerships and breaking down communication barriers between community members and law enforcement.

In addition to his ten years of experience at the Sheriff’s Office, Dodson holds a bachelor’s degree in Criminal Justice Administration, he holds the Peace Officer Advanced POST Certificate, and he is a certified instructor with the state of Montana.

The Undersheriff is second in command to our  Sheriff, Darren Short. As Undersheriff, Dodson will be responsible for many of the day to day operations of the Sheriff’s Office which employees more than 40 people in three locations; Libby, Eureka, and Troy. He will work with employees in various roles as well as handling budgets and work with the County Commissioners. He will also be in charge of the new canine unit. In November, Lincoln County will get two drug detecting dogs. They will be assigned to and live with the deputies, Dodson said.

Dodson encourages the public to call in their concerns and reminds us  that unfortunately, the Sheriff’s Office doesn’t have the power to address  civil matters.

The Libby Elks Lodge 2231 has closed its doors.  They first opened their doors in 1961.

According to Lindsey due to a lack of direction and no slate of officers the decision to close was made.

“ Money was not the cause of the Elks closing it’s doors, it contributed” said Lindsey.

There are 116 members. Members will have  up to 18 months to decide weather they want to maintain an active membership or not. The closest lodges are Kalispell and Sandpoint.

The process has already taken place to liquidate all of the Libby branch assists. The building is already on the market with Deshazer Ryan Reality and everything will be sold  with building. Funds will be  placed into a restricted trust for 5 years if members decide they want to try again, according to Lindsey that would take around 200 people.

The Elks provided great services to this community and will be missed.

Christmas programs, golf fundraisers, corn hole competitions, rental hall, Hoop Shoot, and the soup kitchen are just a few of many charitable, family friendly events that will sorely come to an end.