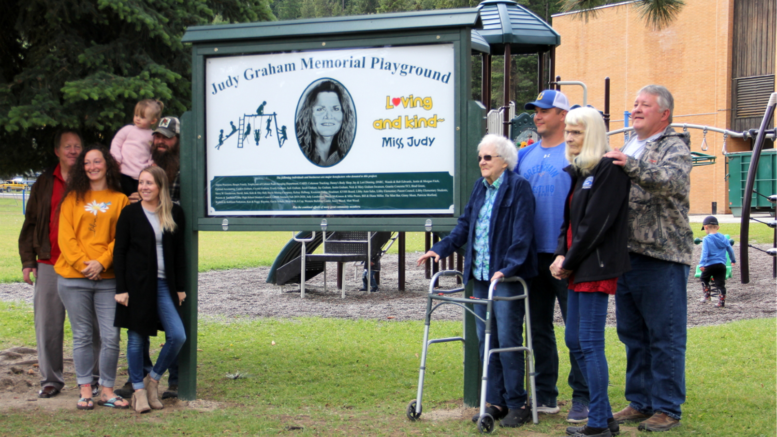 Judy Graham was a long-time, loving educator for Libby Public Schools who passed away on the morning of November 23, 2019.  Because Judy left such a lasting impression on the Libby community, her fellow educators, and countless young children, the idea of erecting a playground in her honor was shared with the Graham family who welcomed the gesture with open arms.  Judy’s philosophy regarding children was clear:  kids should have time to move and play, be loving and kind, make mistakes and learn from them, and most of all just be kids!

“If she had it her way, this would have likely been a theme-park and not just a playground,” shared Superintendent of Libby Schools, Ron Goodman, this past Saturday morning as the new playground signage at Libby Elementary School was unveiled by close friends and members of her family.

The playground itself was opened this past Fall – having raised funds and completed construction in less than a year’s time – with just two rules by which LES students were to abide:  Rule #1, “Be Loving and Kind.”  Rule #2, “Have fun and play!”

Above: Jay Graham (right), who designed the signage to honor his late wife is joined by family at the unveiling this past weekend.

As its first year in business came to a close just over six weeks ago, Ziply Fiber announced plans to bring gig-speed fiber internet service to an
additional 22 markets across Washington, Oregon, Idaho, and Montana this calendar year. The expansion will focus mostly on smaller and rural towns and is part of the company’s multi-year $500 million investment in its network and improved service in both urban and rural setting throughout the northwest region.

Ziply Fiber was in early-stage planning and permitting within these markets as of April 30 but
expected to turn-up service by Labor Day to tens of thousands of homes, apartments, and businesses across the 22 northwest communities, including Troy.

“These markets represent just the beginning,” added Zeitz. “We’re currently drawing up plans for additional builds this coming fall and winter in all four states. As I’ve always said, we believe you don’t have to live in a big city to get great Internet. We’re investing in smaller and rural markets every day, and we continue to drive improvements to ensure that our customers have a refreshingly great
experience when they engage with us.”

As part of its work in its four-state service area, construction crews have been busy building fiber service in stages through several areas of each city and town. While the work will take several weeks and months to fully complete, the company expects to connect its first sets of customers in each town this summer and add more and more addresses each week as the build continues.

While it will take time to upgrade 250,000 square miles of land throughout Ziply Fiber’s four-state service area with new fiber-optic cables, local hubs, new offices, and new hardware to run the network, the company is capitalized for and committed to hundreds more projects.

“All of this work is to support our promise to customers to be consistently on, reliably fast and confidently ready for whatever comes their way,” added Zeitz. “We’re an honestly local company and are proud to be bringing this great service to communities throughout the Northwest.”

Harry Moe and his family spent countless hours together camping, fishing, and hunting along the Fisher River.  Consequentially, fish fries and wild meat on the family table were enjoyed for many years. Though
Harry’s ties to the backroads which hug
the Fisher River run far deeper, as many who knew him will tell you.
“On February 24, 1969, Harry loaded the largest load of logs to ever come out of the Fisher River drainage, on Snell Creek,” read Harry’s obituary in 2018. “The load weighed in at 208,000 pounds, for a scale of 24,000 board feet – enough lumber to build three 1,200 square-foot homes. Harry said, ‘Big logs always attract attention. When you put 18 of them on one truck, they look spectacular, even to a logger. That is
a lot of wood.’”
That job, accomplished with the help of logging truck driver Dick Schrade, was one that Moe beamed with pride about until his passing in June of 2018 – just three months past his 90th birthday. Hence the reason a recent discovery between Doe and Buck Creek along the Fisher hit the hearts of Harry’s
family strongly. 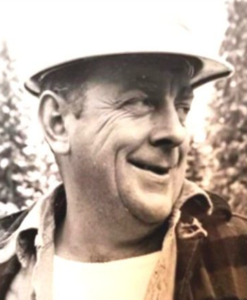 “If you were a hunter and you knew my dad, that stretch of road was likely one you had travelled with him or at the least heard about,” shared Yvonne Resch, Harry’s eldest daughter. “My brother’s best friend, Darryl Judkins, had made a sign in honor of our dad as a 90th birthday. Unfortunately, dad passed away before ever getting to see it.”
The small wooden sign with white lettering which had been nailed to a roadside tree read simply, “Harry’s Hwy.” Judkins had taken his own dad for a drive up the Fisher recently and made the upsetting discovery. Someone had decided to use the now treasured sign as a firing target. Shot it to pieces.
“I hope you know how incredibly special that little sign was to us,” shared Yvonne in a social media post sharing the news. “It just makes my heart hurt.”
Several who knew Harry chimed in on the virtual broadcast shared June 1. And then a private message was received. Touched by the story, as he had passed the sign often, Devin Smook of Libby contacted Yvonne and asked if he could make a new sign for her family.
Within just a few days, the job was done. “Harry’s Hwy sign will be put back up soon!” Resch exclaimed in an online post to update those following the story. “Thank you to Devin for his care and concern for a family he didn’t even know. You never know how you will touch someone’s life, and this was huge for me. You are a very special young man, Devin. Thank you, thank you, thank you.”
Arguably, there is reason to be upset with those who chose to expend their ammunitions on destroying the thoughtfully placed road sign. Though in the end, Harry’s passion for the backcountry and the love he instilled within all those he was given the chance to share it with has clearly prevailed.
Harry’s Hwy was one of the special places which Moe’s family had chosen to spread the ashes of he and his wife, Irene, following his passing. Their ties to the landscapes which have served as the family’s lifeline for generations are simply indescribable. Yet with Father’s Day just around the corner, Harry’s story does seem to lend light to a certain message or two.
Value and respect the graces our landscapes afford us.  Be kind, be forgiving, and stand strong in example to others – more-so in the face of
adversity.  Have faith… and trust that grace will
always prevail.  Always.
Thank you, Harry. 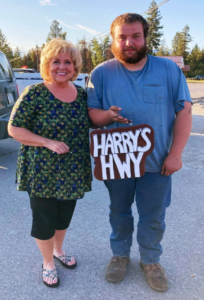 There are a few of us who likely needed those gentle reminders and a little fatherly nudge to simply be better humans.