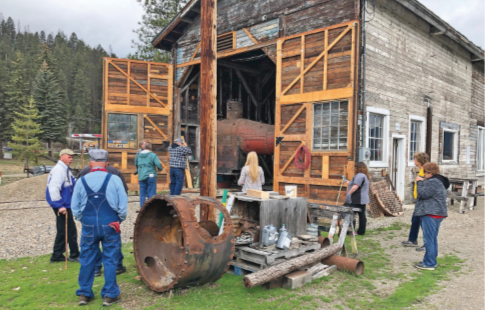 On Thursday, April 18, Heritage Museum volunteers and representatives from Kootenai Country Montana met at the Shay Locomotive to share stories, take a donation photo, and celebrate accomplishments on the project to date.

Ten percent of the proceeds from the Venture Inn’s restaurant sales in the month of February were donated to support this cause. A check in the amount of $1,106 was presented to nine museum volunteers who gratefully accepted.

According to Heritage Museum President, Tammy Byrd, “We’re very happy to receive this donation. It’s going to help this train get up and running and be an asset to our community.” Byrd has served as President for about a year and a half, and she has volunteered for about nine years, also serving as head of archives for the museum.

The Shay is a steam locomotive that was built in 1906, brought to the Libby area in 1909, and then used for logging operations in the area until around 1946. According to volunteer August Hardgrove, after being decommissioned, the train was left sitting on land owned by Weyerhaeuser. In the 1990s, after numerous attempts to purchase the locomotive without response, $1 was sent to Weyerhaeuser, and a receipt was sent back to them in return. The Shay became property of the Heritage Museum, and it has been capturing the hearts and imaginations of Libby historians and rail buffs ever since.

The locomotive has been undergoing restoration for about twelve years, said Hardgrove,  who has committed over 40,000 hours to the Shay Locomotive project. Although there isn’t a clear timeline for completion of the project, Hardgrove told The Montanian that monetary donations and volunteers are extremely helpful and important to keep things moving forward.

Melissa Cady, co-director of Kootenai Country Montana said, “We are super excited to support the restoration of the Shay Locomotive in order to bring tourists to the area, and for the enjoyment of our community